With the week's various Homecoming contests beginning to wind down, two of the 10 teams began separating themselves from the pack on Thursday afternoon. 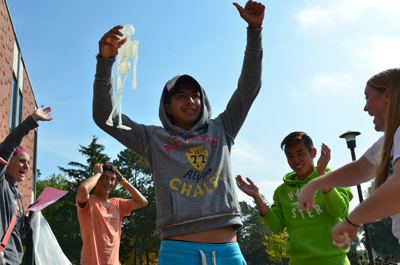 After the day's Team Games activity – a scavenger hunt – the Forensic Phi Delts had a lead with 150 points. Team Pi Kappa Gamma, which won Thursday's scavenger hunt, was second overall with 110. Many of the other eight teams remain within striking distance in the Homecoming week standings.

Thursday's scavenger hunt involved teams searching for clues in various locations. The final destination was garbage bags, in which there were numerous parts of a plastic skeleton scattered about. Blind-folded team members had to find all the pieces of the skeletons, at which point their teammates assembled them.

A handful of competitions remain, including a lip sync contest at the pep rally, the king and queen coronation and the “CSI Photo” competition – which involves each team taking 14 different themed pictures and sending them in for judging.

More photos can be seen on our Facebook page.