Lakeland College celebrated a significant coach from its past and looked ahead to a bright future during a pair of dedication ceremonies as part of Saturday’s Homecoming activities. 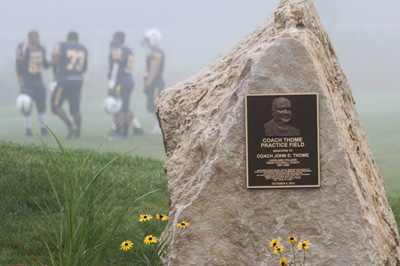 The college dedicated the completion of a new wrestling room, and renamed the football practice field for the late John Thome, the winningest football coach in Lakeland history.

Thome, who died in 2011, was head coach during Lakeland’s golden age of football. He is Lakeland’s all-time wins leader in football, having compiled a 78-53-2 record and winning seven conference championships in 14 seasons as head coach from 1967-80. He was a six-time conference coach of the year, three-time NAIA coach of the year nominee and was inducted into the Lakeland Athletic Hall of Fame in 1997 and into the Wisconsin Football Coaches Association Hall of Fame in 2001.

He also served on the coaching staffs at Kiel, Howards Grove, Oostburg and Plymouth, wrapping up his career as a physical education teacher at Howards Grove High School and coach of the golf team.

The college erected a large stone bearing a plaque with Thome’s likeness beside the practice field, located behind the Wehr Athletic Center. Money was also raised to contribute to the existing John Thome Endowed Scholarship Fund.

Thome’s wife, Darlene, and their three children, sons Craig and Jon, and daughter Trecia Shane, and their families attended the event, along with several former Lakeland football players who were coached by Thome.

“It’s so appropriate that we’re dedicating a practice field in his honor,” Trecia said. “It was before, during and after practice that my father made so many memories. I’m just now beginning to understand the important influence he had on so many people. Teachers, coaches and business people I run into say, ‘You’re Coach Thome’s daughter? I wouldn’t be where I am today if it wasn’t for your father.’

“My dad wore so many hats – coach, teacher, professor, recruiter, husband, father, friend. We can all be thankful that he crossed our paths.”

Mike Brunmeier, a 1973 graduate, served on the leadership committee that spearheaded the naming of the field. He spoke at the dedication on behalf of Thome’s former players.

Dan Eck, the college’s interim president, said the monument behind the Wehr Center will allow Thome to “watch over everyone here. As a college we will change, but we can never forget what made this a special place.”

The wrestling room is a space in the southwest portion of campus previously occupied by GT Graphics, a privately-owned print shop. Originally intended to be a temporary solution, Lakeland renovated the space to accommodate the needs of the wrestling program and allow the team to permanently use it as a standalone practice facility.

The walls of the room spotlight Lakeland’s All-Americans and Academic All-Americans, providing current wrestlers with role models from the program’s past.

“This takes the possibilities for our program and our student-athletes to much higher levels,” said Lakeland head wrestling coach Mike DeRoehn. “The facility provides a safe, clean, motivating environment for our athletes to train in on a year-round basis, if they choose. It will increase our practice efficiency and team training opportunities exponentially, as well as greatly enhance our recruiting.”