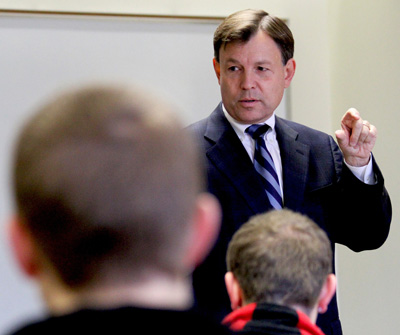 He also told the students how fortunate they are to be attending Lakeland.

"Don't ever lose faith in the great education you will receive here," he told the class. "When you're in a class with 12 people, you will learn so much. I'm not sure you fully appreciate yet being here at Lakeland. The same classes at UW-Madison, UW-Milwaukee or UW-Whitewater might have 50 students, even more."

Keebler, senior partner at Keebler & Associates, LLP, gave the students great advice about the industry and how to embark upon a rewarding, successful career. He paraphrased Sir Winston Churchill, stressing to the students that success is gained by moving from one failure to the next with enthusiasm. He also told the class, "The harder you work, the luckier you become."

Keebler founded Keebler & Associatiates, LLP, a tax advisory and CPA firm in Green Bay, Wis. The firm is nationally known for its advisory, tax and estate planning expertise and counsel.

Individually, Keebler has been named by CPA Magazine as one of the "Top 100 Most Influential Practitioners in the United States" and one of the "Top 40 Tax Advisors to Know During a Recession."

Among the many interesting subjects Keebler touched on during his hour-long lecture were:

After the class ended, Keebler shook students' hands and offered them helpful individual advice before he headed off for an appointment in Milwaukee.

"You have to create your own luck," he said just before class ended. "If you remember anything from today, it's that hard work pays off."