Werner said he wanted to bring together themes from his background and that each piece represented something significant. 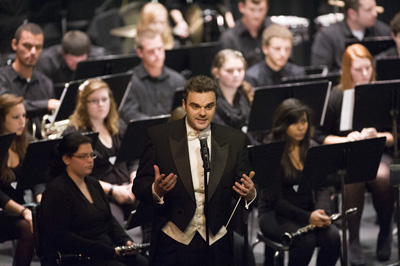 Sousa, one of the early directors of the U.S. Marine Band, is known throughout America as "The March King," and his march, "Hands Across the Sea," is a not-often-heard gem in the band repertoire.

"This piece was in scripted with the subtitle: ‘A sudden thought strikes me; let us swear eternal friendship,' and from this I take a smile and acknowledgement of the new friends I've made here and their helpfulness in my transition to Lakeland," Werner said.

William Schuman's "Chester" is a full overture based on the Revolutionary War hymn by William Billings of the same name. Originally conceived for orchestra as a three-movement suite, the final movement, "Chester", got a band makeover in Wednesday night's version, which was a stable of the band repertoire.

Werner also had direct ties to Whitacre's "October." It was written for a group of high schools and universities in Nebraska just before he arrived there to work on his doctorate. Headed by Brian Anderson, the band director at Freemont High School, the work has become an instant classic in the world of concert band.

"To me, this piece tied in the entire program…friendship, education, time, sentiment," Werner said. "The title works chronologically, the themes work musically, it fit for homecoming and our band played the heck out of it."

Werner was active in commissioning new works for wind band. His Central bands participated in or organized consortiums with new music by several contemporary composers, and ensembles under his direction appeared at numerous state conventions in Wisconsin and Nebraska.