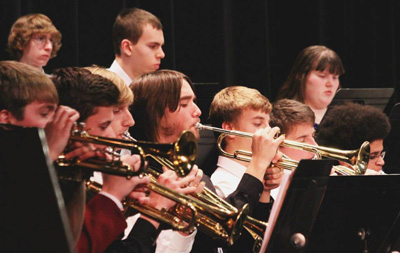 The students, who rehearsed only twice together prior to their collaborative performance, drew a standing ovation from many of the parents, friends and music lovers who attended. The concert included works by Beethoven and Bach.

"It was great fun," said Werner. "It's amazing what young people can do when they're challenged. The results were pretty impressive. Never underestimate young people."

"These kids came together, from different schools, not knowing each other, and in an instant, they came together and played beautiful music," said Richard Tengowski, honors band chairman. "We could tell during the first rehearsal that this would be one of the better groups, so we chose a little more challenging music. The kids really stepped up and did a remarkable job."

Band directors from each of the CLC schools nominated their top performers to make up this all-conference musical ensemble. The students rehearsed at Lakeland under their respective schools' band directors on Dec. 17, then came together again at Lakeland on the day of the performance for four final hours of rehearsal under Werner.

Werner seemed to enjoy the evening, as he enthusiastically offered up brief nuggets of background and other details about some of the pieces the students performed. Tengowski said he was impressed with Werner's passion and musical acumen.

"We want this event to be on a neutral site, so Lakeland is ideal, but also, this is a way for these talented area students to discover that there's a great college in their backyard with spectacular music teachers," said Tengowski. "This is really a win-win for everyone."