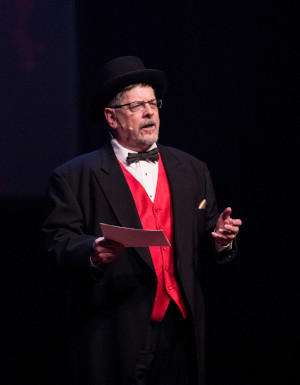 Lakeland University's Charlie Krebs, associate professor of theater and speech, is the 2019 winner of the annual Underkofler Excellence in Undergraduate Teaching Award.

Krebs, who joined Lakeland's faculty in 2007, is Lakeland's 28th winner of the Underkofler, which recognizes outstanding performance in undergraduate teaching. The award was presented on April 24 at Lakeland's annual Honors Banquet.

Krebs has developed a reputation at Lakeland for being an inspiring teacher, one who encourages students to dig deeper in and out of the classroom to reach their full potential. He's also mentored a number of students outside the classroom.

In nominating Krebs for the Underkofler Award, students offered these thoughts:

Krebs, who has directed dozens of plays and acted in more than a dozen around the nation, teaches acting, public speaking, interpersonal communication and orchestrates nearly all facets of Lakeland's theatre program. Krebs is an active member of the campus, having most recently brought the popular TEDx event to Lakeland and serving as emcee of the university's Movers & Shakers Gala.

An expert in the area of public speaking, He is a motivational speaker and CEO of Communication Arts, which focuses on training in business communications.

Before joining Lakeland's faculty, Krebs served as a teacher and theater director at the University of Wisconsin-Sheboygan. He has also taught in Illinois, Michigan, Louisiana, Kentucky and North Carolina.