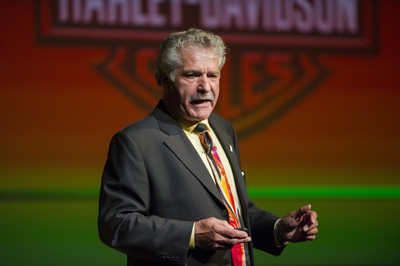 As he took the stage at Lakeland College's Bradley Theatre Thursday night to tell the story of how he helped rev up the Harley-Davidson brand, Clyde Fessler revved up the crowd with just the right marketing flair.

The lecture was part of a festive night for Harley enthusiasts, a night that included a pre-lecture reception that had Lakeland's Wehr Center decked out with Harley motorcycles, clothing and advertising courtesy of Route 43 Harley-Davidson in Sheboygan. Owner Richard Kummer and several members of his staff attended, and the event drew many local Harley riders who parked their bikes outside the Wehr.

Fessler, a Sheboygan native who retired as a Harley executive in 2002, played an integral part in Harley-Davidson's rebound from near bankruptcy. Some highlights of his presentation:

Fessler joined Harley-Davidson in 1977, and he recalled spending two days at the Sheboygan Harley dealership owned by Bill Kummer researching to prepare for his job interview. He served as director of marketing services, general sales manager, director of licensing, vice president of general merchandise and vice president of business development

The University of Notre Dame graduate also served on the board of trustees for the American Motorcycle Association and the Motorcycle Safety Foundation.

Fessler's appearance at Lakeland was made possible by a gift from The Charlotte and Walter Kohler Charitable Trust. Lakeland annually brings a nationally known business or economic figure to its main campus to speak with Lakeland students and the general public.