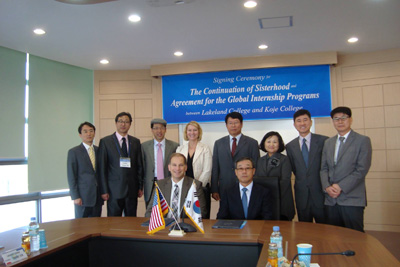 Kiel kindergarten classrooms will welcome student teachers from South Korea next fall thanks to an agreement with Lakeland College.

Students from Koje’s Early Education Department will come to Lakeland in August 2014 to take English classes and have two opportunities to interact with local children.

The first Koje cohort, which will include four students, will volunteer in Lakeland’s daycare during August and September. Then, in October and November, they will volunteer half-days in kindergarten classrooms at Zielanis Elementary School in Kiel.

The program is expected to continue on a yearly basis.

Jen Siebert, Lakeland’s director of international programs, said Koje has a need for teachers, and due to the international makeup of the region, speaking English is important.

“These internships will give Koje students an opportunity to use their English skills in American classrooms, which will be invaluable experience when they graduate,” Siebert said. “We reached out to our contacts at Zielanis Elementary and they were enthusiastic about welcoming these students into their classrooms. These internships will be valuable international experiences for all involved.”

The agreement was signed at Koje in early November during a week-long visit to South Korea by Siebert and Lakeland Interim President Dan Eck.

Lakeland and Koje initially signed a sister school agreement in 2008, which was renewed during this recent visit. Under the agreement, accounting students from Koje can finish the final two years of their bachelor’s degree at Lakeland. Also, each summer, Koje sends students to participate in Lakeland’s English Language Institute (ELI).

Eck and Siebert also visited Ansan University in Ansan, a suburb of Seoul. Lakeland and Ansan have had a sister school agreement since 2006.

Like Koje, each summer Ansan sends students to Lakeland’s ELI. Lakeland sends up to six students to Ansan each July to participate as conversation partners at Ansan’s English Camp. Last fall, four Ansan students participated in an internship program at Lakeland, enrolling in the ELI and working in on-campus departments.