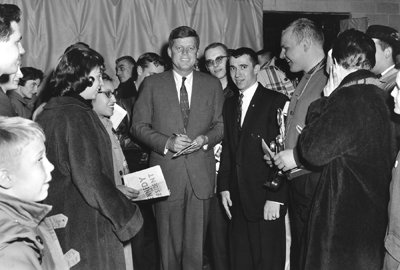 Today, millions of Americans will pause to mark the assassination of President John F. Kennedy in Dallas on Nov. 22, 1963.

Kennedy’s death stunned the world, and while today it is a history lesson or television documentary for many, it remains a fascination thanks, in part, to several story lines and subplots intertwined in and around the event, said Lakeland College Associate Professor of History Rick Dodgson.

“The assassination has become an almost mythical event, a national obsession” said Dodgson, an expert on 20th Century American history. “The fact that the details of the case were mishandled and that there were holes in the investigation gave rise to all sorts of conspiracy theories. Set in the Cold War, with the assassin, Lee Harvey Oswald, only recently returned from living in Russia, the whole thing reads like a real life James Bond movie.”

The last presidential assassination before Kennedy was William McKinley, who was shot by an anarchist while attending the Pan American Exhibition in Buffalo, N.Y., in fall 1901. McKinley’s death caused an outpouring of national grief, but his assassination did not generate the same sort of long-term interest as Kennedy’s. Dodgson suggests that is largely the result of media coverage.

“Just like the first presidential debate between Kennedy and Richard Nixon, all these events were viewed in real time by an American television audience,” Dodgson said. “The shooting of Oswald occurred on live television. Kennedy’s assassination was the start of the modern media age.”

The assassination took on additional significance in the years to come. Dodgson noted that many historians believe Kennedy’s death helped his successor, Lyndon Baines Johnson, persuade Congress to approve two landmark pieces of legislation – the Civil Rights Act of 1964 and the Voting Rights Act of 1965. “Most historians believe their passage would have been more difficult had that tragedy not been hanging over the country,” Dodgson said.

And the story remains relevant today because people use notable events like Kennedy’s assassination to place themselves in the context of history, Dodgson said. “If you can remember where you were when Kennedy died or when the Challenger exploded or when the planes hit the World Trade towers, that makes you a witness to history,” Dodgson said. “It’s a shared experience that adds to our sense of American identity.”