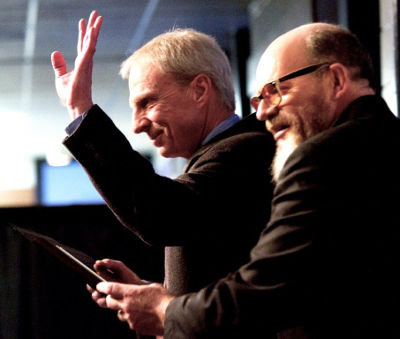 Lakeland College's David Lynch, instructor of general studies and Chinese, is the 2016 winner of the annual Underkofler Excellence in Undergraduate Teaching Award.

Lynch, in his 18th year at Lakeland, is the college's 25th winner of the Underkofler. which recognizes outstanding performance in undergraduate teaching. The award was presented on April 6 at Lakeland's annual Honors Banquet.

Lynch was honored for being one of Lakeland's most appreciated and unique teachers. Student nomination letters described Lynch's teaching style as fun and helpful, and noted that he goes out of his way to impact the lives of his students. Students spoke to the dynamic atmosphere in his classrooms and how his sense of humor aids in getting everyone involved and participating.

Lynch also excels in utilizing visual media to address challenging and difficult materials in both interdisciplinary courses and his Chinese language courses. The learning that occurs in his classes was described by one student as the most "realistic" that student had experienced.

He was also honored for the roles he plays with students outside the classroom, most notably as advisor of the Zeta Chi fraternity and as Faculty Athletic representative to the NCAA.

Lynch initially came to Lakeland in 1991, serving as director of international student advising, an adjunct instructor of writing and a hall director. He left Lakeland to serve as a corporate Chinese language and cultural consultant, primarily in Texas, before returning to Lakeland in his current role in 2000.

He also serves Lakeland as Chinese language and cultural consultant for the Summer English Language Institute. He previously served as director of academic advising for three years, and has been on a host of committees during his tenure.

He has played a key role in nurturing the relationship between Lakeland and sister schools Shanghai Finance University, East China Institute of Technology and Huainan Normal University. He has also led Lakeland students on travel courses to China.