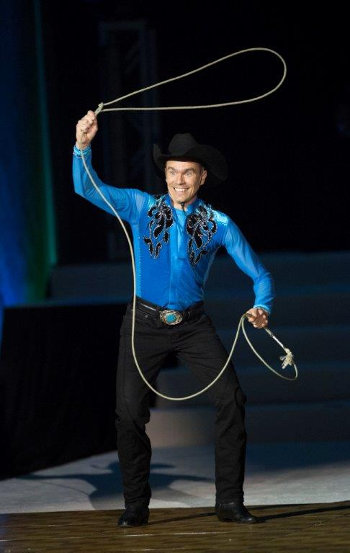 A record crowd of more than 650 people gathered for Lakeland College's ninth annual Movers & Shakers Gala on May 14 for a spectacular evening of dancing, multi-course gourmet food, fellowship and philanthropic fundraising.

This year's event, which benefited Lakeland College, marked the return of dancing as eight community leaders and their professional partners were showcased.

The Rev. Matthew Widder, pastor of Holy Name of Jesus and St. Clement parishes, won the Movers & Shakers Gala championship, which goes to the dancer with a combination of the best judges' scores and the most purchased votes. Widder, the last dancer of the night, performed a Texas two-step routine. Widder was sponsored by Friends of Father Matthew Widder.

As a result of Widder's victory, his charity of choice, St. Vincent de Paul Society of Sheboygan, will be the 2017 partner charity and receive $10,000.

Winning the “Judges' Choice” award was Brooke Van Asten, a territory director at ACUITY, who danced a swing routine. Van Asten was sponsored by ACUITY.

In its previous eight years, Movers & Shakers raised more than $3 million, including a four-year total of $263,500, for more than 30 nonprofit organizations.

The other 2016 dancers included:

Complete biographies of each dancer are available on the Movers & Shakers website, http://moversandshakersgala.org.

Each celebrity was paired with a professional dancer, and they spent months of training as they competed to win the support of three judges and the sell-out crowd.

Emcees for the evening were Mike Langan and Ike Dyksterhouse. Judges were Sandi Vasatka, Nellie Schmitt and Jenna Roeske.

Photos from this year's event are the Movers & Shakers Gala Facebook page: http://moversandshakersgala.org/facebook.