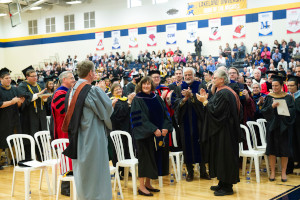 Linda Tolman, who is retiring this month after 50 years as a member of Lakeland's faculty, was named professor emerita, Lakeland's highest honor, at graduation on May 11. Lakeland President David Black announced the honor.

Tolman joined Lakeland in 1969 as a faculty member and housemother. In addition to her service as a faculty member, she has held numerous leadership positions on a variety of committees, and been extensively involved in student advising, especially freshmen.

Lakeland's resident Shakespeare expert, she coordinated several travel trips that connected Lakeland students to the larger world around them, including regular treks to London and Greece as well as a canoe trip down the Missouri River to retrace part of the famous Lewis and Clark Expedition.

She received several National Endowment for the Humanities grants to attend and present her research at NEH Seminars. She also studied with renowned literary scholars Ian Donaldson at the Folger Shakespeare Library and with Gregory Nagy of Harvard University's Center for Hellenic Studies.

She was a co-recipient, with retired Lakeland Professor David Lauer, of a Sperry and Hutchinson (S&H) Foundation grant that brought to Lakeland prosecuting attorneys Aubrey Daniel (My Lai Massacre) and Samuel Dash (Senate Watergate Committee). It marked the first time the two attorneys spoke publicly about their role in these historic events.

She is very active in the community, serving as a member of the Plymouth Library Board and Foundation Board since 2007, and a founding member of Hearthstone, a group dedicated to enhancing the lives of young disabled people.

She was a recipient of a Kohler Art Foundation grant to fund an arts project with Lakeland students and young people at RCS Empowers, an organization dedicated to helping individuals with disabilities and special needs work, live and function with dignity and respect.