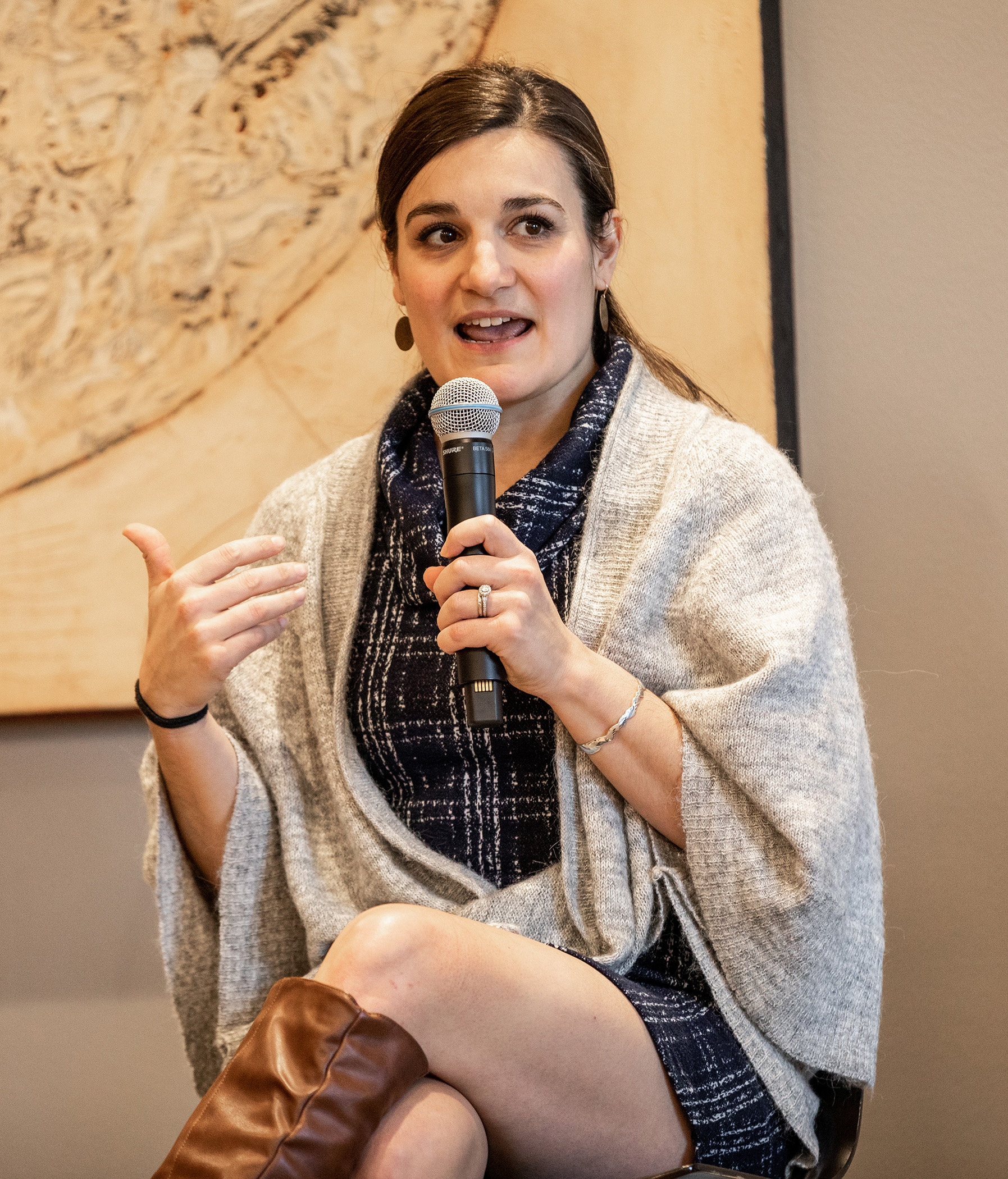 Editor’s note: Lakeland has a tradition of welcoming students from all over the world to Sheboygan County, and many choose to call this region home. This is the latest in an ongoing series profiling Muskies who have decided to settle locally after graduation.

When Gina Covelli ’06 first came to Lakeland, she didn’t know her current job even existed. She’s thankful for a Lakeland experience that taught her the skills to find what’s become a very rewarding career path.

Covelli, director of community impact for the United Way of Sheboygan County, recently returned to campus to share her story as part of the Humanities & Fine Arts Colloquium, an event that lets current and prospective students hear from and interact with successful Lakeland graduates.

Covelli transferred to Lakeland as a junior having spent a year at a large private college in Tennessee and a community college. Her goal was to work in the media and be a foreign correspondent, so she immediately got involved with Lakeland’s student newspaper, The Mirror, which opened the door to a community that helped her thrive.

“I felt like I belonged,” Covelli said. “I found people who accepted me and professors who met me where I was at and challenged me to grow. Lakeland creates a wonderful environment where students can learn and grow.”

Covelli completed a bachelor’s degree with a major in writing and double minor in communications and English. She left the area for a decade to work as journalist and editor before moving back to work in community relations at Lakeland. She got involved with United Way of Sheboygan County as a member of the organization’s Board of Directors and Community Action Team, then was hired into her current role in 2019.

Covelli facilitates the investment of approximately $2 million dollars in United Way partner agencies and programs, guides the Community Action Team and serves as the staff liaison and resource for UWSC partner agencies. She oversees the impact of the Community Partnership for Children, and she participates in numerous community committees and coalitions to address inequities in Sheboygan County.

Her United Way role was one she discovered, she says, thanks to the skills she acquired at Lakeland, which include how to learn by doing.

“I established a continual habit of learning, and Lakeland helped me establish a baseline to always be curious and not to stop when things get hard,” Covelli said. “I had an opportunity to navigate and explore when I didn’t have it all figured out. You have to allow yourself bends and turns in the road along your journey and you’ll land in places you didn’t even know existed.”

Covelli is often speaking to groups in her role, and she again credits her Lakeland experience for preparing her.

“Humanities & Fine Arts gives you a tool kit and empathy for reading people, meeting them where they’re at and navigating them,” she said. “No matter what job you’re in, you’re going to have to do those things for the rest of your life.”

While she was writing news as a journalist at Lakeland, Covelli also enjoyed creative writing like fiction and poetry, which is still a passion. She’s published two short stories and is currently working on a novel. She is also an entrepreneur – she and her husband, Brent, own Sheboygan Fit Body Boot Camp. She is a founding member of Active8, a non-profit organization of volunteers who have a passion for making Sheboygan the best place in Wisconsin, the U.S. and the world, and she serves on the Sheboygan Symphony Orchestra board of directors.