As David Gross approached the timeline on the second floor of Lakeland’s Campus Center to get a better look at his grandfather’s picture, he started to choke up.

“This is emotional,” he said. “I never dreamed this would happen.”

Prior to July 8, the last time Gross, 78, was on Lakeland's campus was in 1950. He was 6 years old, and the institution, which was called Mission House College, was overcoming the recent death of President Paul Grosshuesch, David’s grandfather. The seminary was still part of the institution and 18 of the current campuses' 23 buildings didn't exist.

His recent visit was not just a walk down memory lane. To say that the roots of David’s family run deep at Lakeland doesn’t quite do it justice.

Talk about having connections.

Gross, who worked 50 years at the Barlow Ranger District, Mt. Hood National Forest, in Dufur, Ore., as a forester, a community engagement specialist and now a retired volunteer, had always been interested in revisiting Wisconsin to reconnect with the campus and Elkhart Lake, where the family lived for a time.

His daughter-in-law, Hannah, fueled this summer’s visit so she could learn more about David’s early roots and provide time for him to spend with his granddaughter, Ramona. Through pure chance, they booked a stay in the home of Nanette Bulebosh ’79 M.Ed. ’97, who contacted Lakeland when she learned a bit more about David’s deep connections to the institution.

During his visit, Gross explored the area, finding the Elkhart Lake house where his family lived and the elementary school where he attended. He spent several hours at Lakeland peeling back the layers of his family’s history. He did not know the connection to Muehlmeier, he didn’t realize his father had graduated from Mission House and a visit to the Esch Library uncovered the 1937 Mission House yearbook that included a senior picture of his mother, which he’d never seen.

Gross brought with him a few pictures, including one that showed him on the steps of a previous entrance to the president’s house, where his family lived in the basement for a short time while they waited for their home in Elkhart Lake to be completed.

“I’ve learned so much about my personal and family history which I never knew,” Gross said. “It’s been very meaningful for me. I’ve come away feeling a connectedness to Lakeland where grandpa ministered as president and my parents graduated, where mom and dad met and were married and where grandma (Oleta Rolewitch Grosshuech) lived after my grandfather’s death.

“It filled in a lot of unanswered questions that I didn’t know I really had. I feel I’ve become connected with Lakeland and hope to stay connected the rest of my life.”

Gross, his younger brother, Richard, and other family members plan to attend the August 25 rededication ceremony of Grosshuesch and Muehlmeier Halls. They are a living connection to important leaders in the institution’s 160-year history.

A climb through David Gross' family tree quickly leads to several primary players in the first half of the institution's history.

His great-great-grandfather-in-law, Hermann A. Muehlmeier, is among the institution’s true legends. Born in Germany in 1829, he emigrated to America with his mother and siblings in 1847. Following graduation from seminary in Pennsylvania, he came to Sheboygan, Wis., as a German Reformed pastor in 1853 and founded the Zion Church (now Zion UCC).

In 1854, he was among a small group of men who formed the Sheboygan classis, the governing body that would oversee local churches. Muehlmeier was named pastor of Immanuel Church in the town of Herman and, with Saron pastor Jacob Bossard, started giving instruction in their homes to young men who wished to become ministers or teachers. The seeds for Mission House were planted.

After Mission House was founded in 1862, Muehlmeier was elected the inaugural housefather in 1864 to live in the first building, supervise the students and join Bossard as the first two teachers. He was named Mission House’s second president, serving from 1885 until his death in 1907.

The book “A History of Mission House-Lakeland” notes, (Muehlmeier) had given a life’s work to the school. More than any other man he had guided the institution and pleaded its cause in the church. He had done so at great personal sacrifice, but with an unshakable conviction that his was a calling from God.”

Gross’ great-grandfather, John W. Grosshuesch, married Sila Muehlmeier, one of Hermann’s six children. John was born in a log cabin on campus, graduated from Mission House in 1878 and was known as the “grand old man” of Mission House after working at the school for 56 years, including 38 as a professor.

Gross’ grandfather, Paul Grosshuesch, graduated from Mission House College and Seminary. Prior to being named president in 1931, he was a minister for 22 years, including pastor of the Zion Reformed Church that was founded by Muehlmeier.

Known by the nickname “Prexy,” Grosshuesch guided the institution through creation of the first rooms on campus for female students to live, the birth of the intercollegiate athletic program and the Muskies mascot, construction of the original portion of the library and the first gymnasium (Founder’s), as well as the Great Depression and World War II.

His presidency was included a plan to relocate the college to Sheboygan. In 1945, a group of Sheboygan citizens offered to donate a 232-acre site north of the city for relocation of the college, which would be renamed Chapel Heights. Grosshuesch was on leave from Mission House making fundraising calls to raise dollars to fund the move when he was killed in an auto accident on September 26, 1949, in Iowa.

Gross doesn’t have any real memories of his grandfather, although among his photos is one of him as a child with Paul and Oleta.

A Return to His Roots

The Gross family moved from Wisconsin to New York when David’s father took a job with Time Life Inc., then he moved to Arizona with his mother and brother in 1959 when his parents divorced. David graduated from the University of Arizona with a bachelor’s degree in agriculture with a specialty in watershed management.

During his freshman year, Gross was offered a summer job with the Barlow Ranger District in Dufur, Ore., and he returned in subsequent summers before being hired as a professional forester when he graduated. He later became manager of the Youth Conservation Corps on the Mt. Hood National Forest.

In 2014, the U.S. Department of Agriculture’s Forest Service named him a National Volunteer Award Recipient for his work promoting employment and volunteer opportunities on his forest and his work with at-risk youth.

His last visit to Wisconsin was in 1961 the summer before entering college to visit his grandmother, Paul’s wife, Oleta, in Sheboygan. She died in 1980.

The most recent visit included his 7-year-old granddaughter, Ramona, and she became the seventh generation from the Grosshuesch family on the Mission House/Lakeland campus.

This visit to campus that lasted about four hours was 72 years in the making.

“My expectations were to maybe find the house and the school in Elkhart Lake, visit the village, drive around Lakeland and that was about it,” Gross said. “My expectations were met a thousand times over. I owe my very being to Mission House, now Lakeland, because it was there that my mother met my father. These are my roots.” 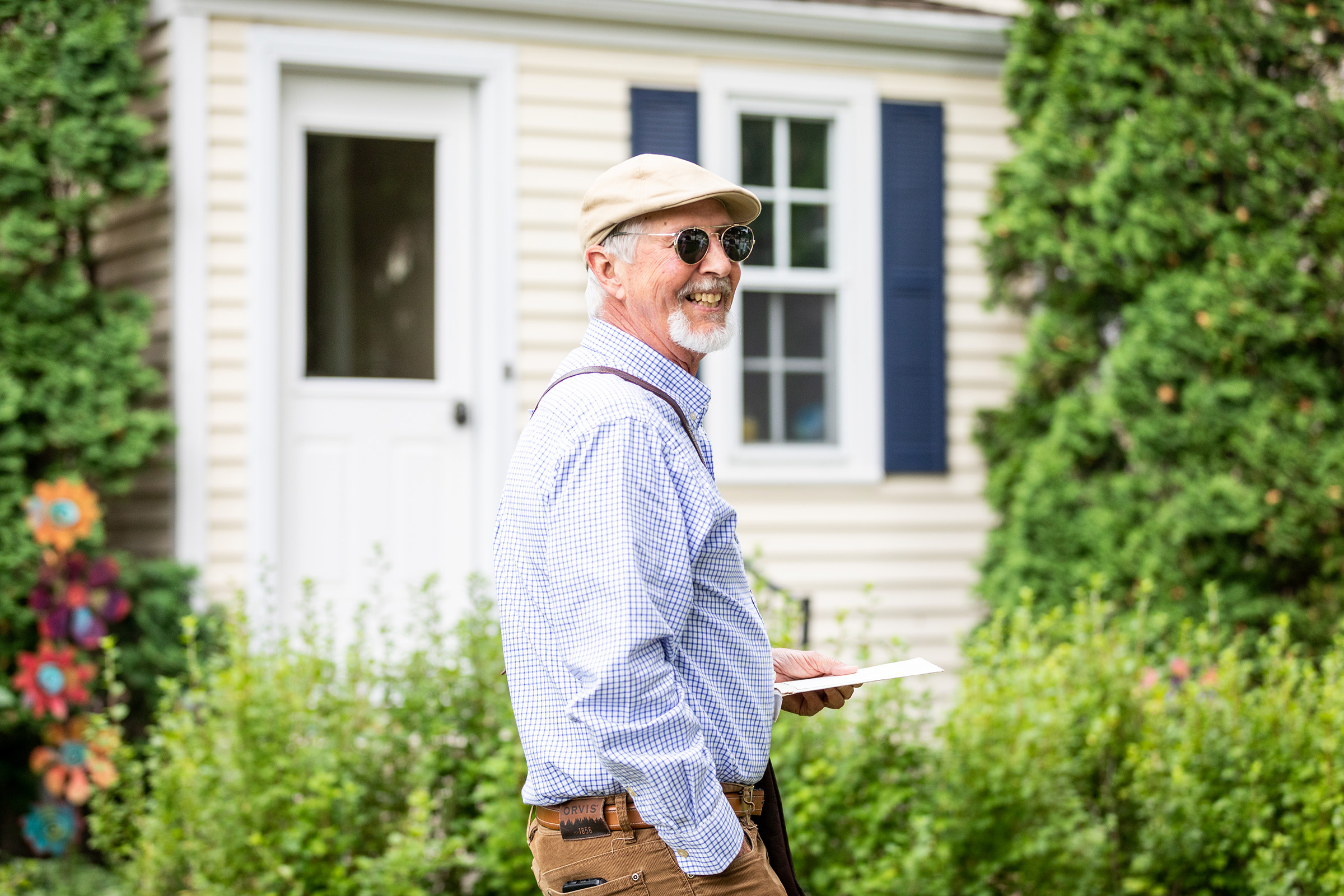 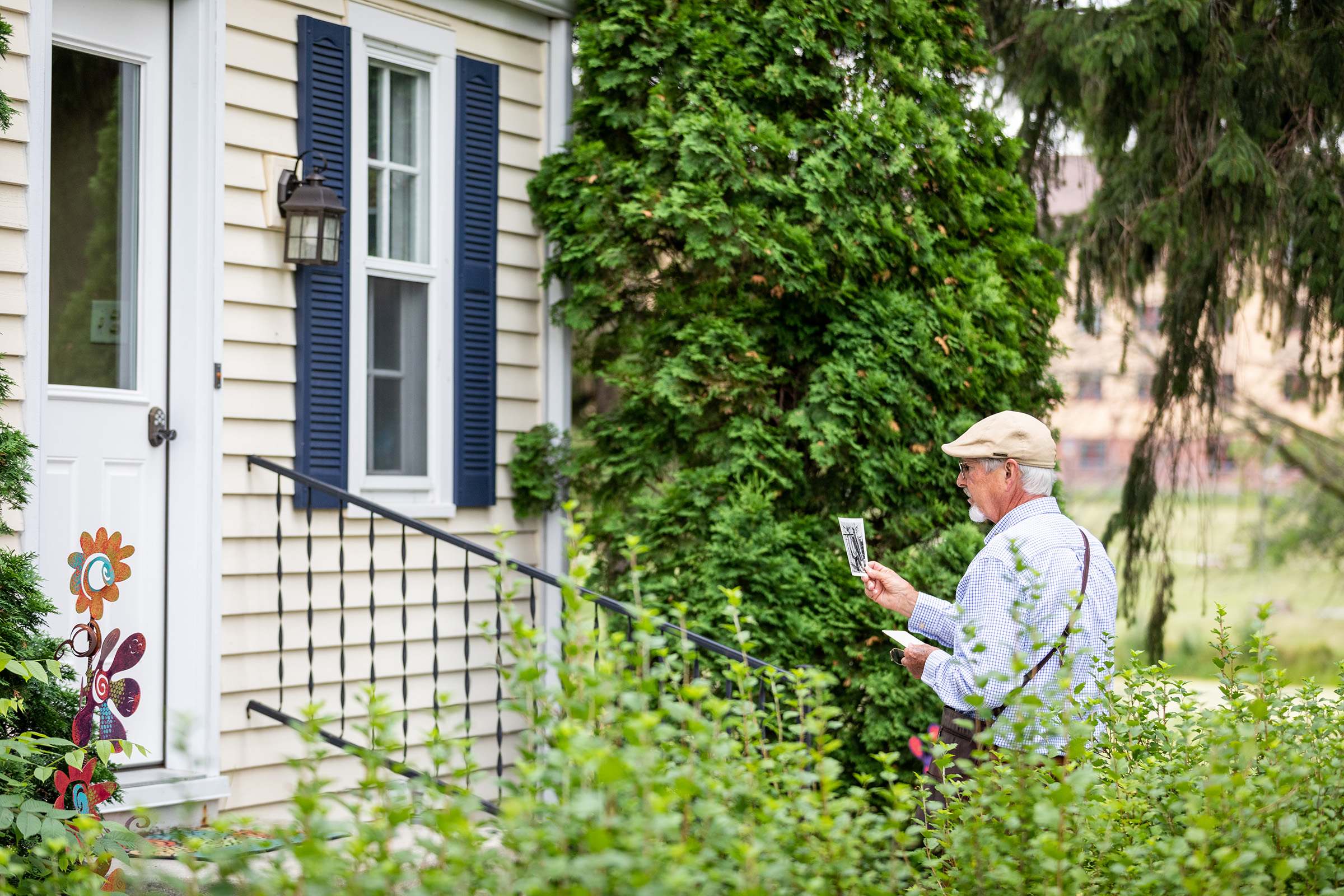 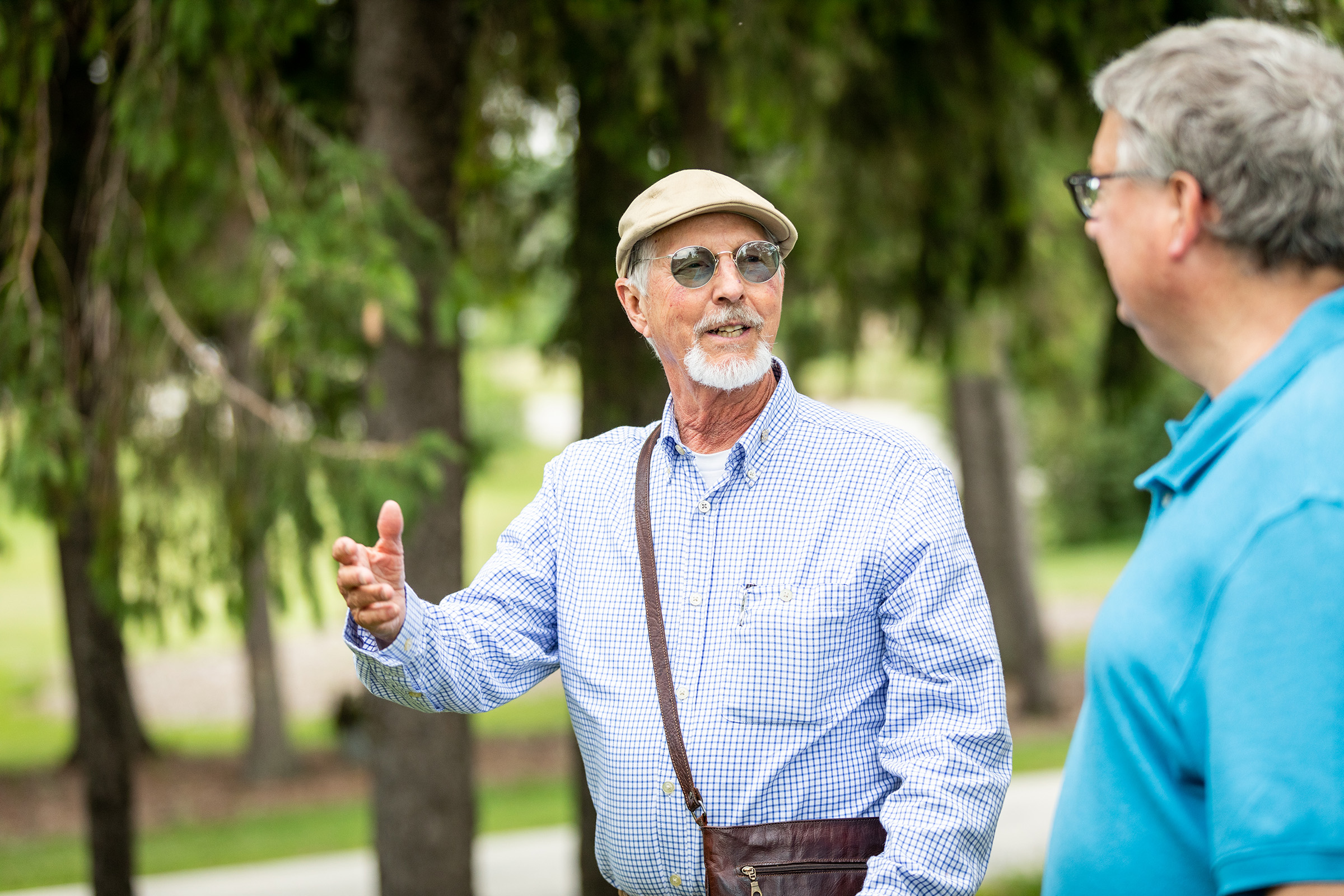 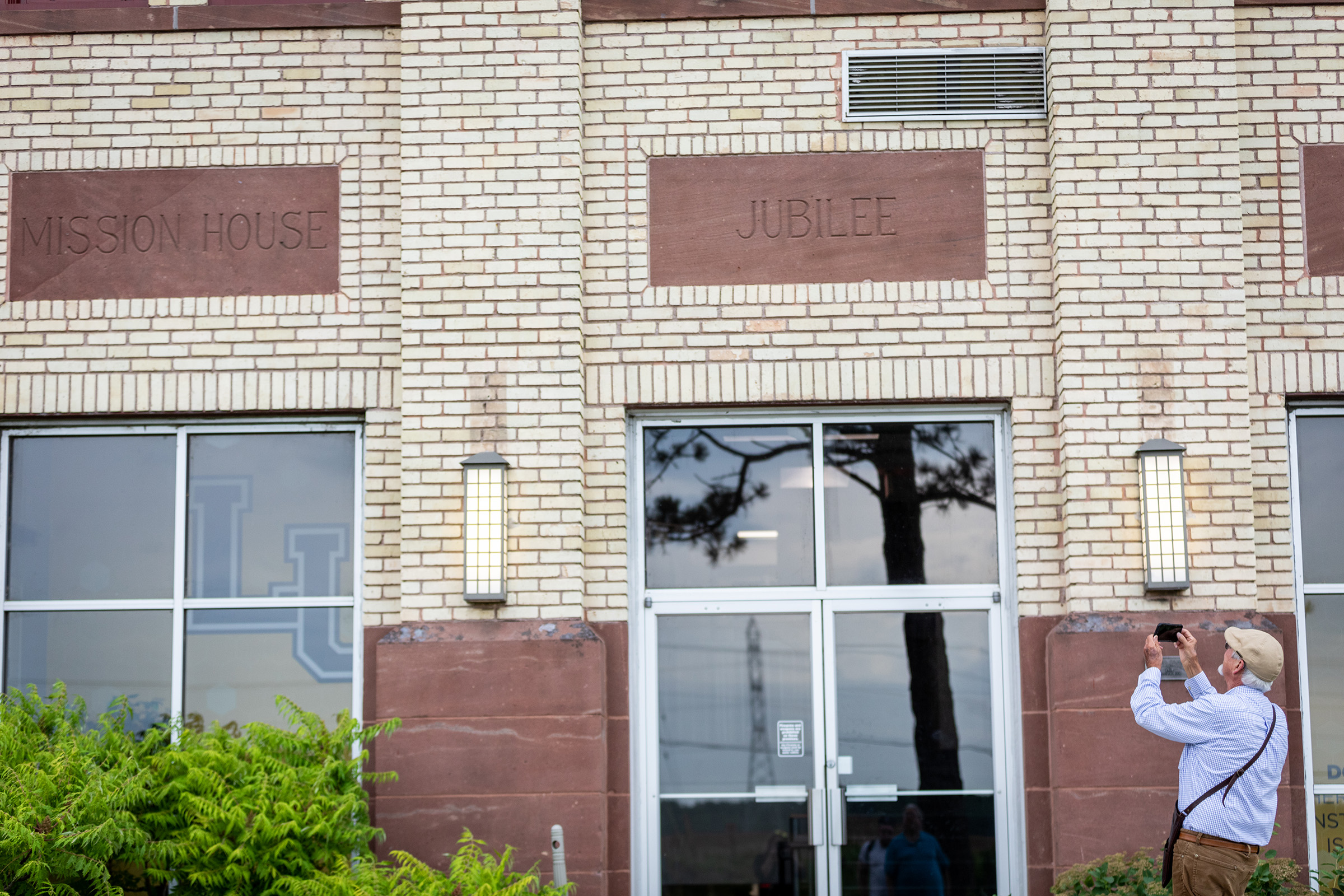 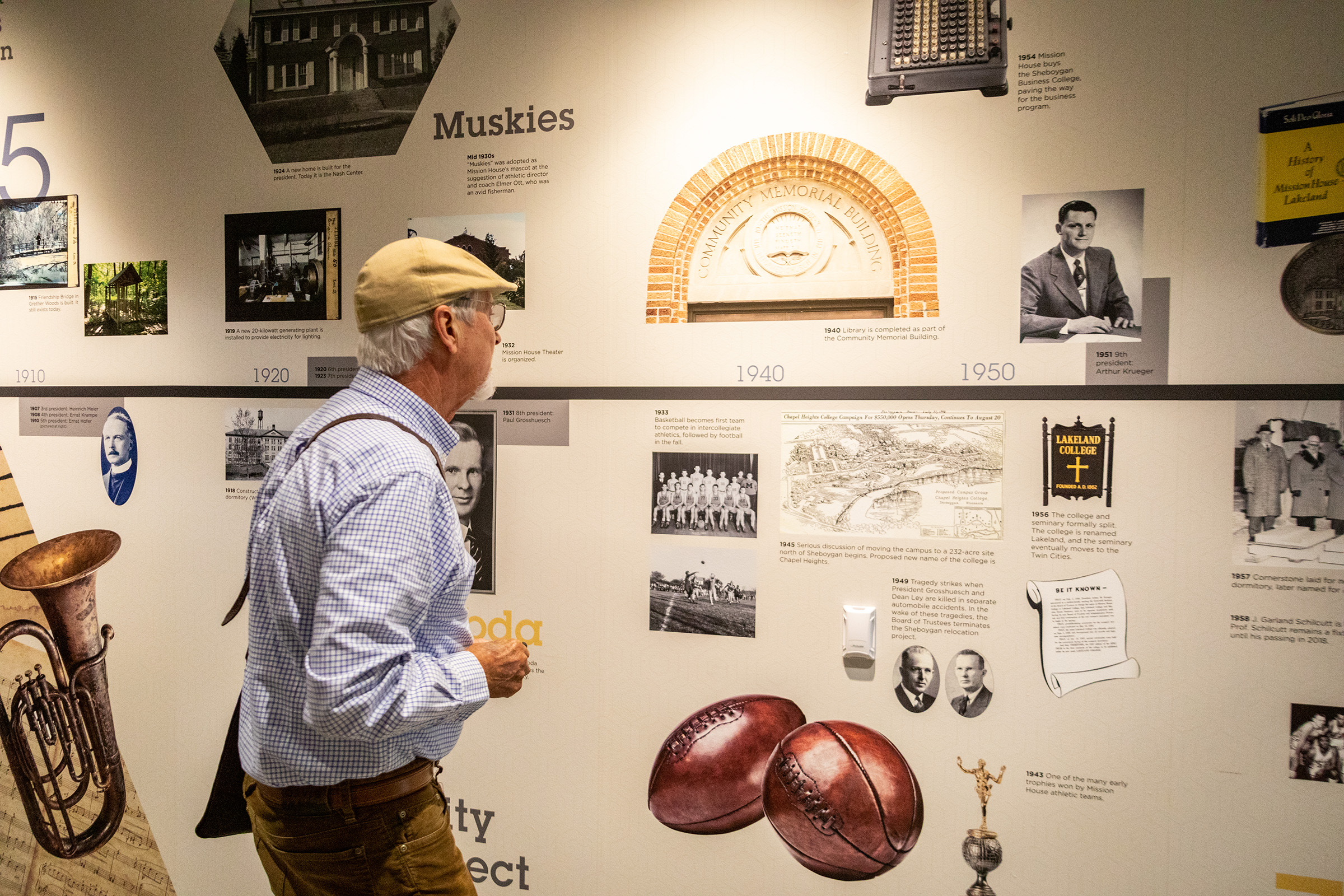 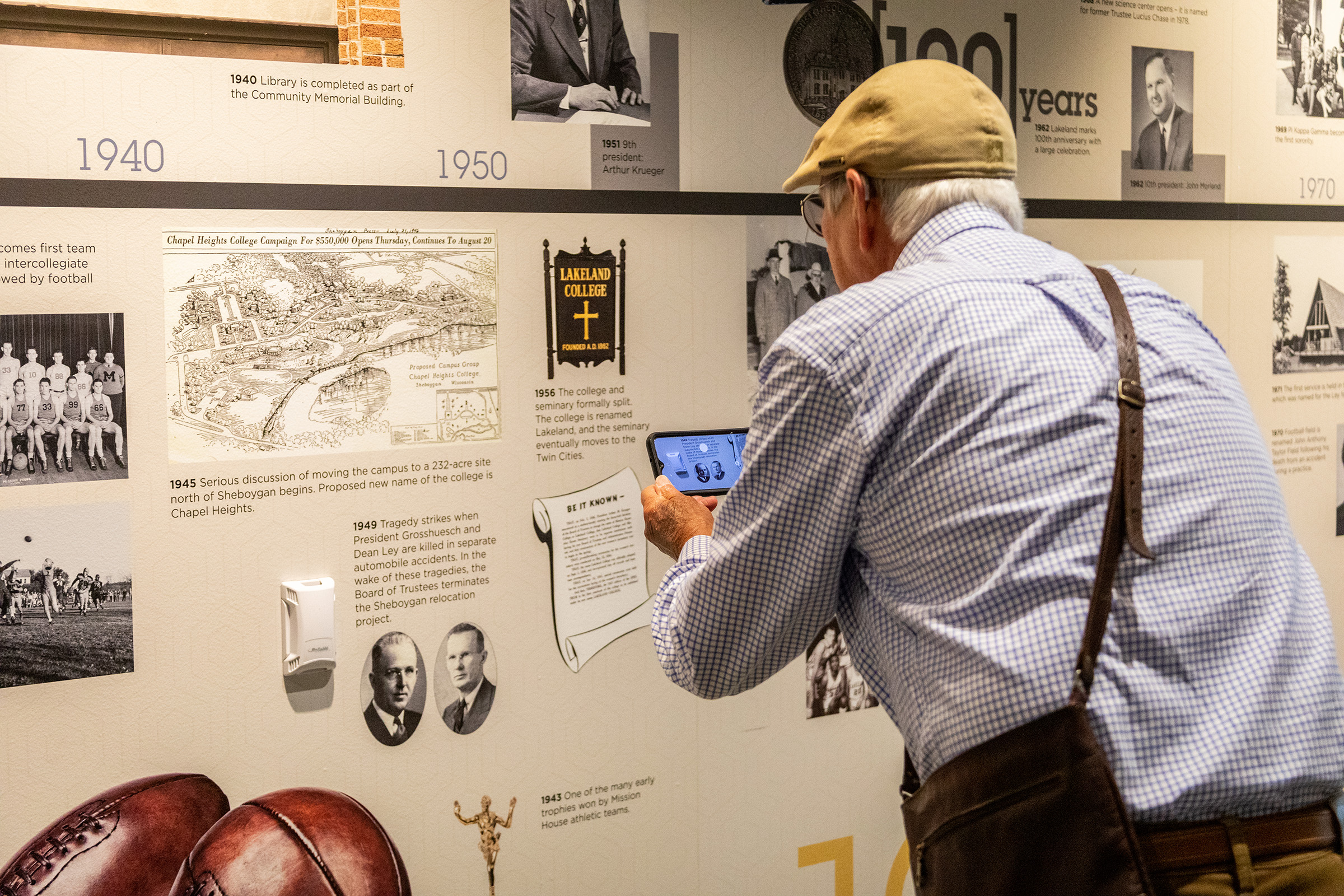 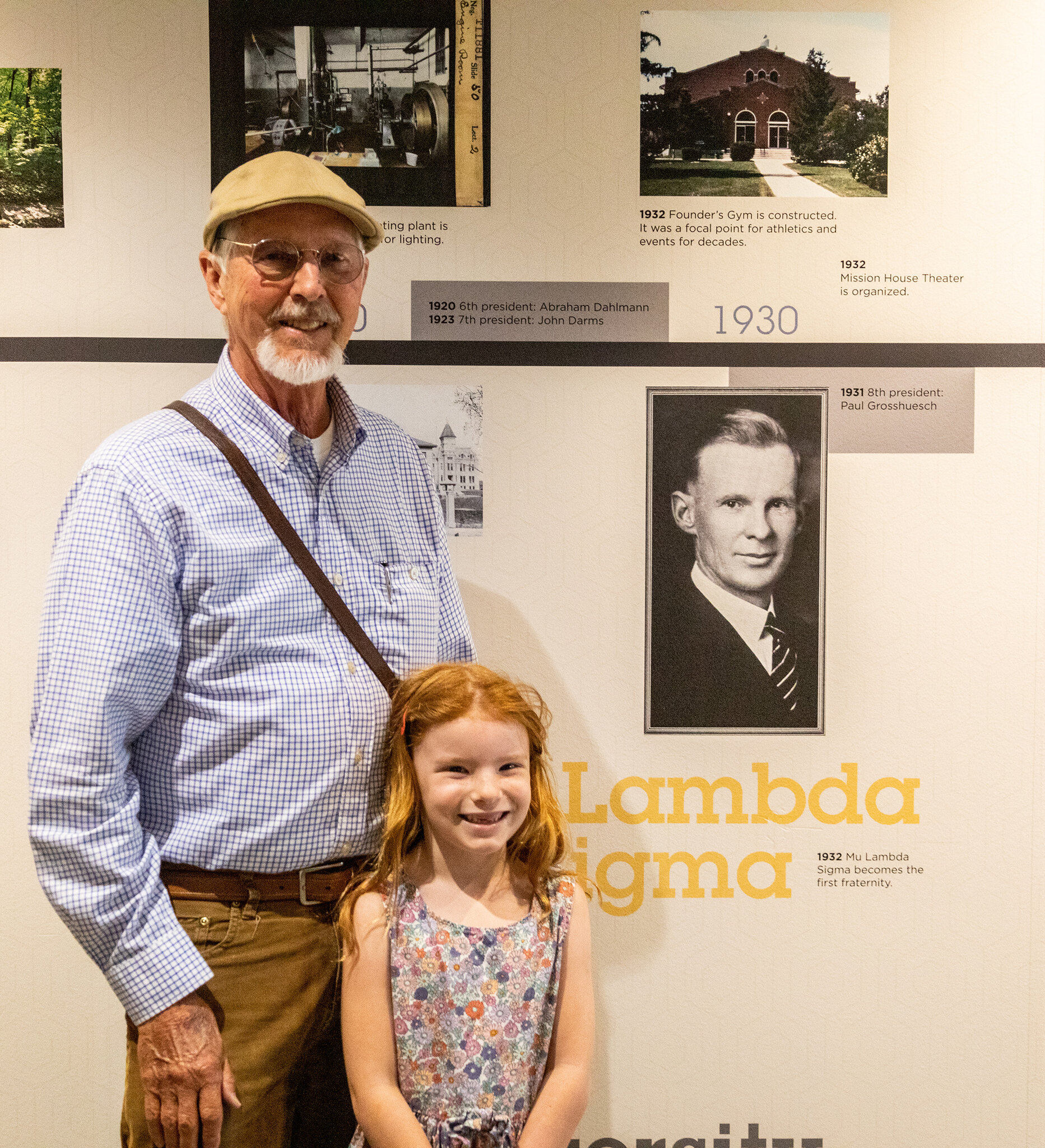 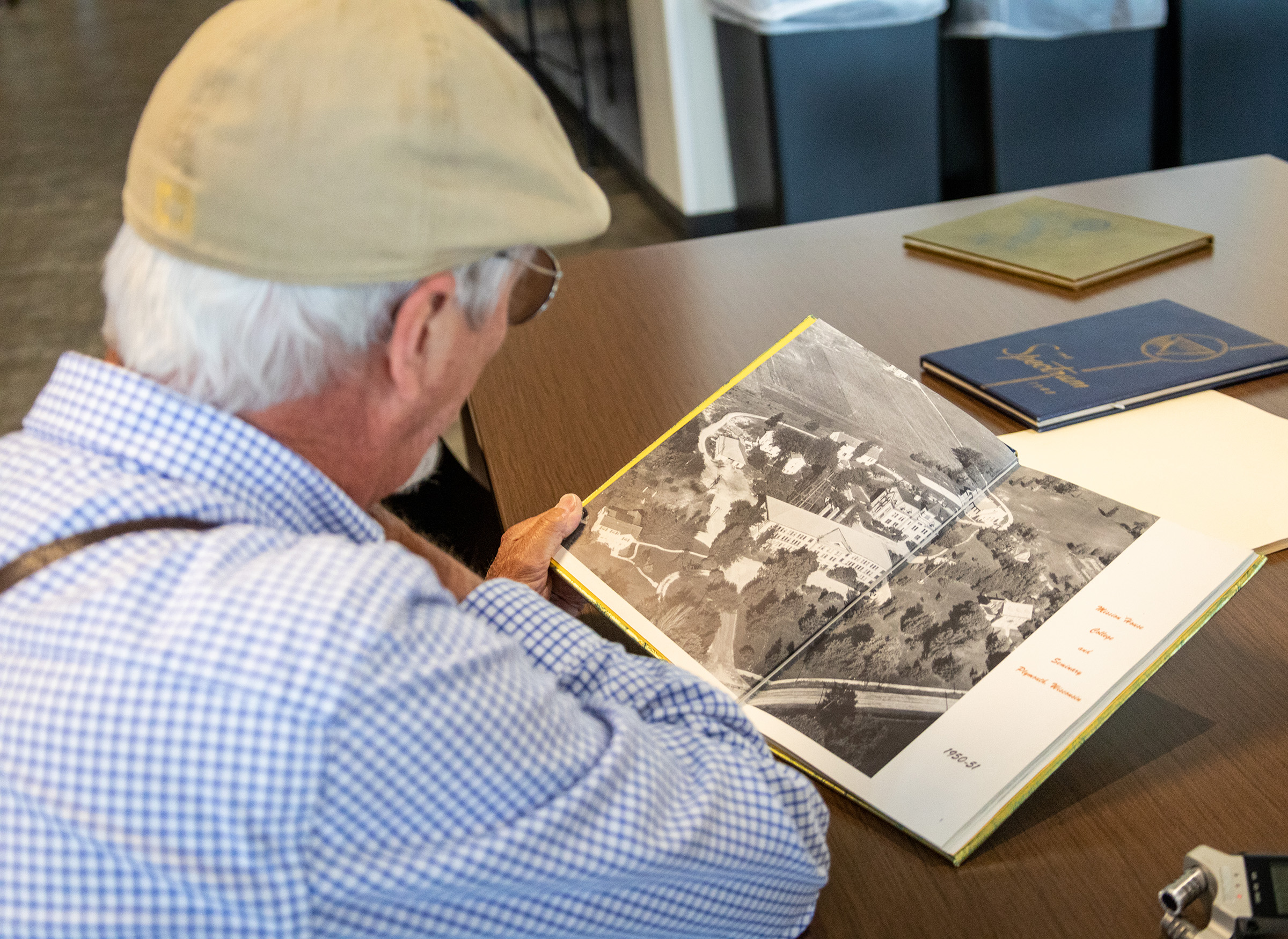 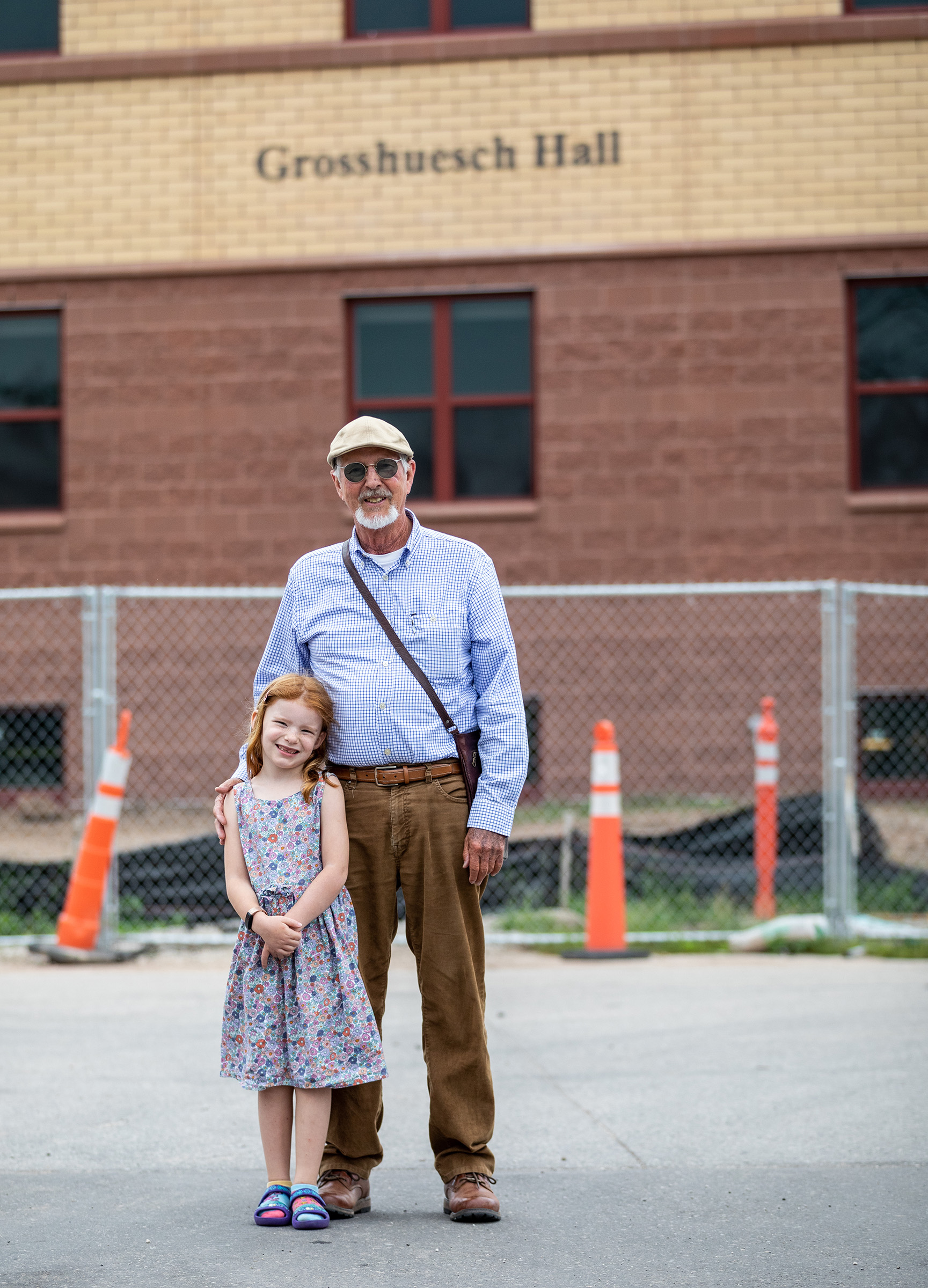 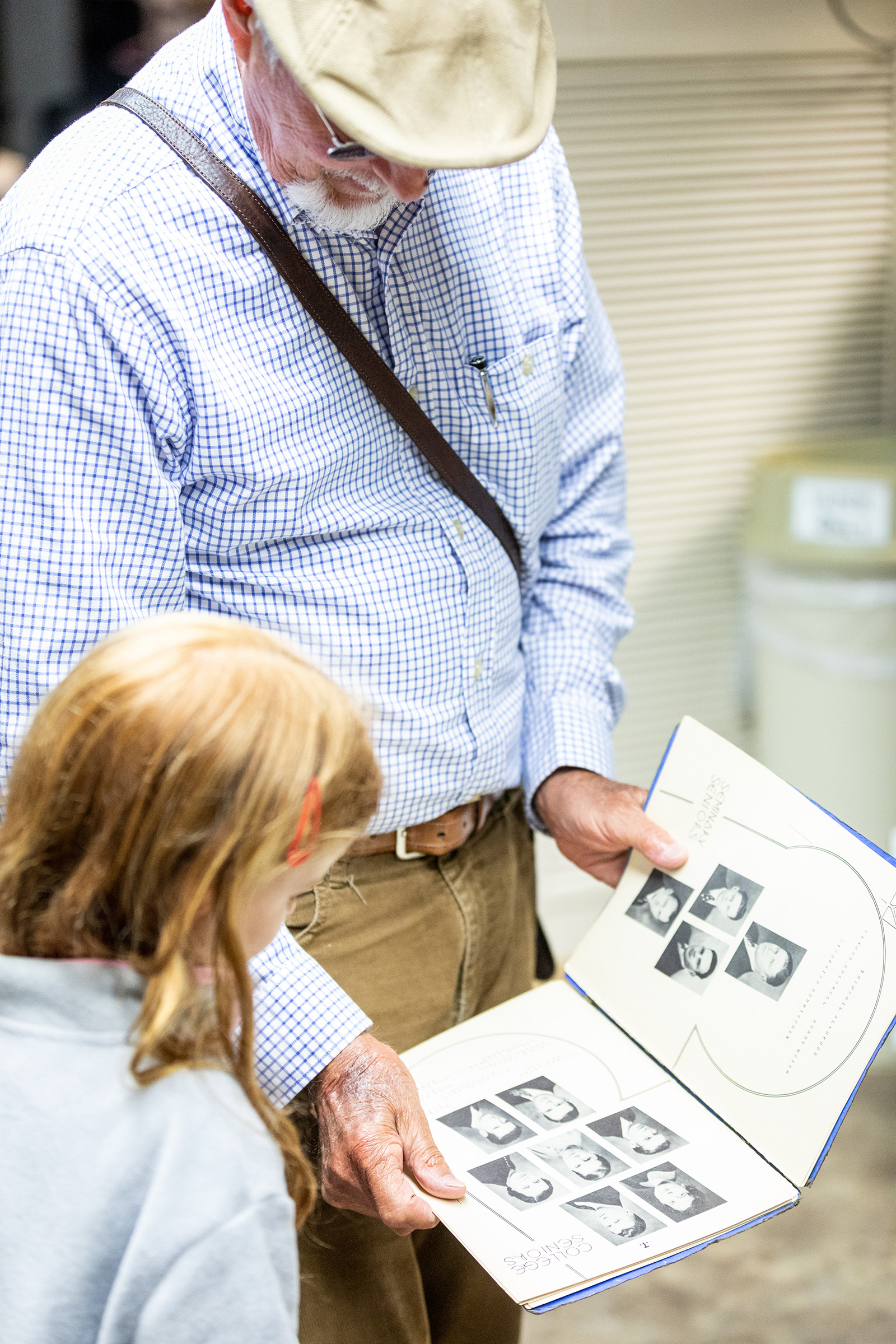 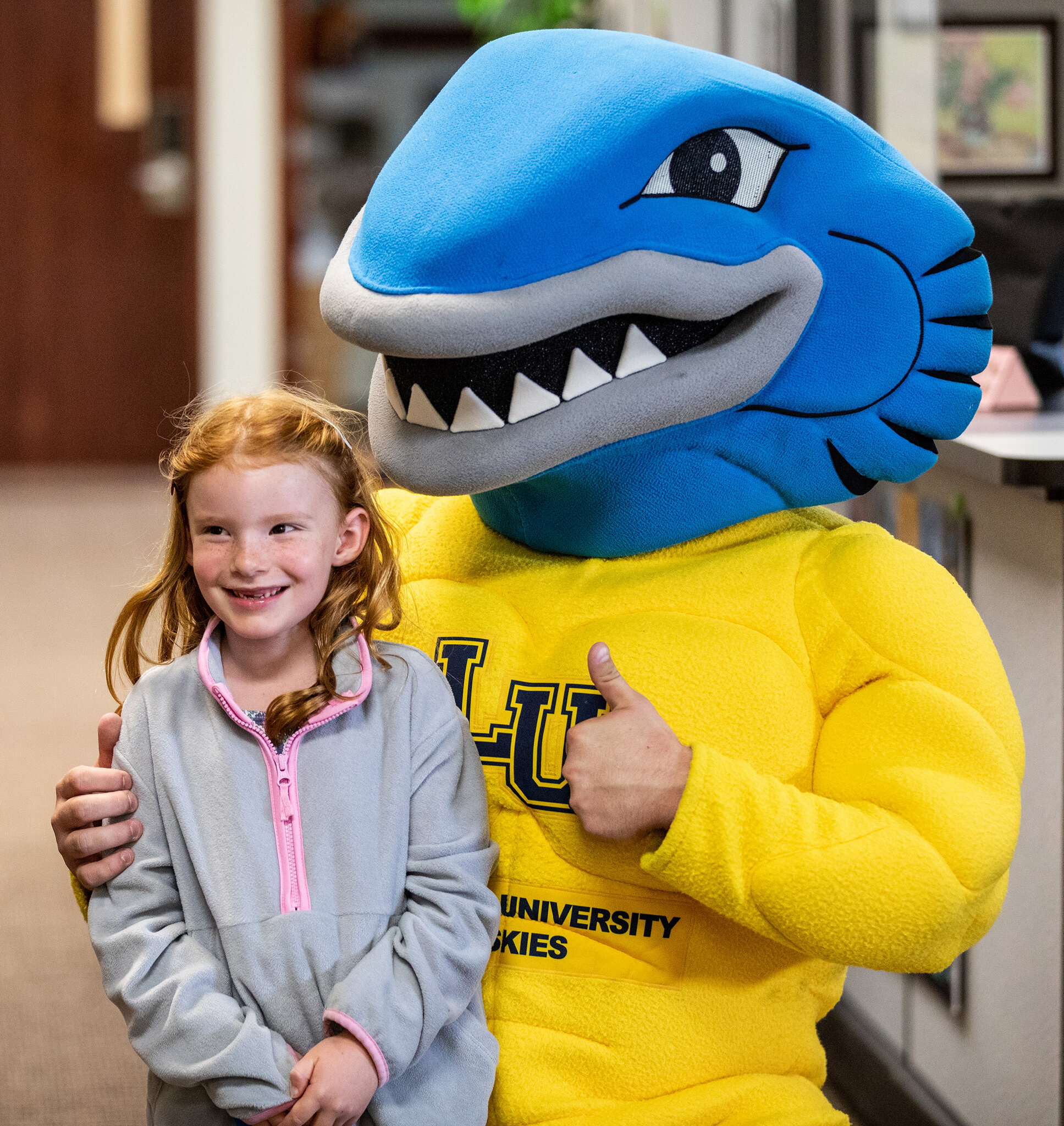