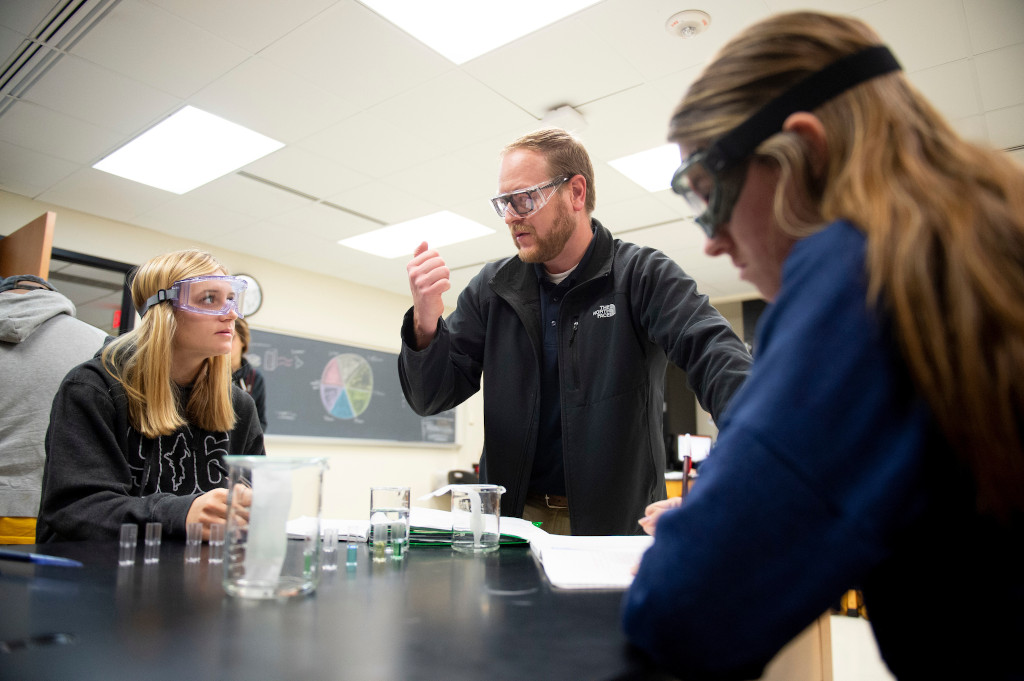 Arvan, who leads Lakeland’s sport management and leadership program, joined Lakeland’s faculty as a full-time member in 2007 after serving for years as an adjunct instructor and coach. She was tenured and promoted to associate professor in 2010.

Arvan has also taught courses in coaching, mathematics and leadership, these latter in Lakeland’s newly formed master’s degree in leadership and organizational development.

She also serves Lakeland as director of athletics and senior woman’s administrator, and has been a frequent speaker at NCAA conferences, most notably on the development of student-athletes as leaders in their communities.

Arvan has been elected by her peers to serve on several university committees, including the Academic Personnel Review Committee, the Provost’s Council and search committees.

Pickhardt joined Lakeland as a full-time biology faculty member in 2006 after serving as a post-doctorate research associate at Stony Brook University and Dartmouth College. He was tenured and promoted to associate professor in 2012.

Pickhardt has a reputation for being a passionate, engaged and challenging instructor in his primary discipline, and he is also an effective instructor in Lakeland’s interdisciplinary Core and summer undergraduate research program (LURE).

Pickhardt served as the Natural Sciences Division chair for four years, and his faculty peers elected him to serve as a representative to the Executive Leadership Team in 2019. He is frequently invited to serve on search committees for new faculty members and collaborates with other departments to ensure ethical stewardship of Lakeland’s natural spaces.

In 2018-19, he completed foundational work necessary to create an embedded experiential education opportunity for Lakeland’s elementary education students at Wilson Elementary School in Sheboygan. He has also taken the responsibility of ensuring that Lakeland’s education programs will have DPI approval.

McGivern, who teaches biochemistry and chemistry, joined Lakeland’s faculty in 2014 and is in his sixth year of full-time, tenure-track service. McGivern came to Lakeland from Carroll University where he was an adjunct lecturer and served as a postdoctoral industry consultant at the Medical College of Wisconsin.

In his time at Lakeland, he has developed new courses in biochemistry and chemistry, supported the development of a partnership with Concordia University Wisconsin for pre-pharmacy students, led students in short-term study abroad experiences to Belize and Europe, helped develop the stem cell research lab and engaged students in scientific research through LURE.

McGivern is serving his third year as a representative on the Academic Programming & Innovation Team and has also served on several search committees. He also advises students in the Honors and food safety and quality programs.

Tompkins joined Lakeland University-Japan as a full-time history faculty member in 2013. He teaches American history and government courses at the Tokyo campus, and he has provided institutional service on scholarship committees, search committees and policy committees.

Tompkins has participated in the cross-campus Interdisciplinary Studies Committee and presented a recorded presentation at the General Education Symposium, held at the main campus in 2017. He has a reputation for being a rigorous instructor who engages his students in “doing” history through creative techniques such as gaming, student-created historical narratives and role-playing.

He is also an accomplished scholar who regularly presents original research at professional conferences; he has also published a monograph.