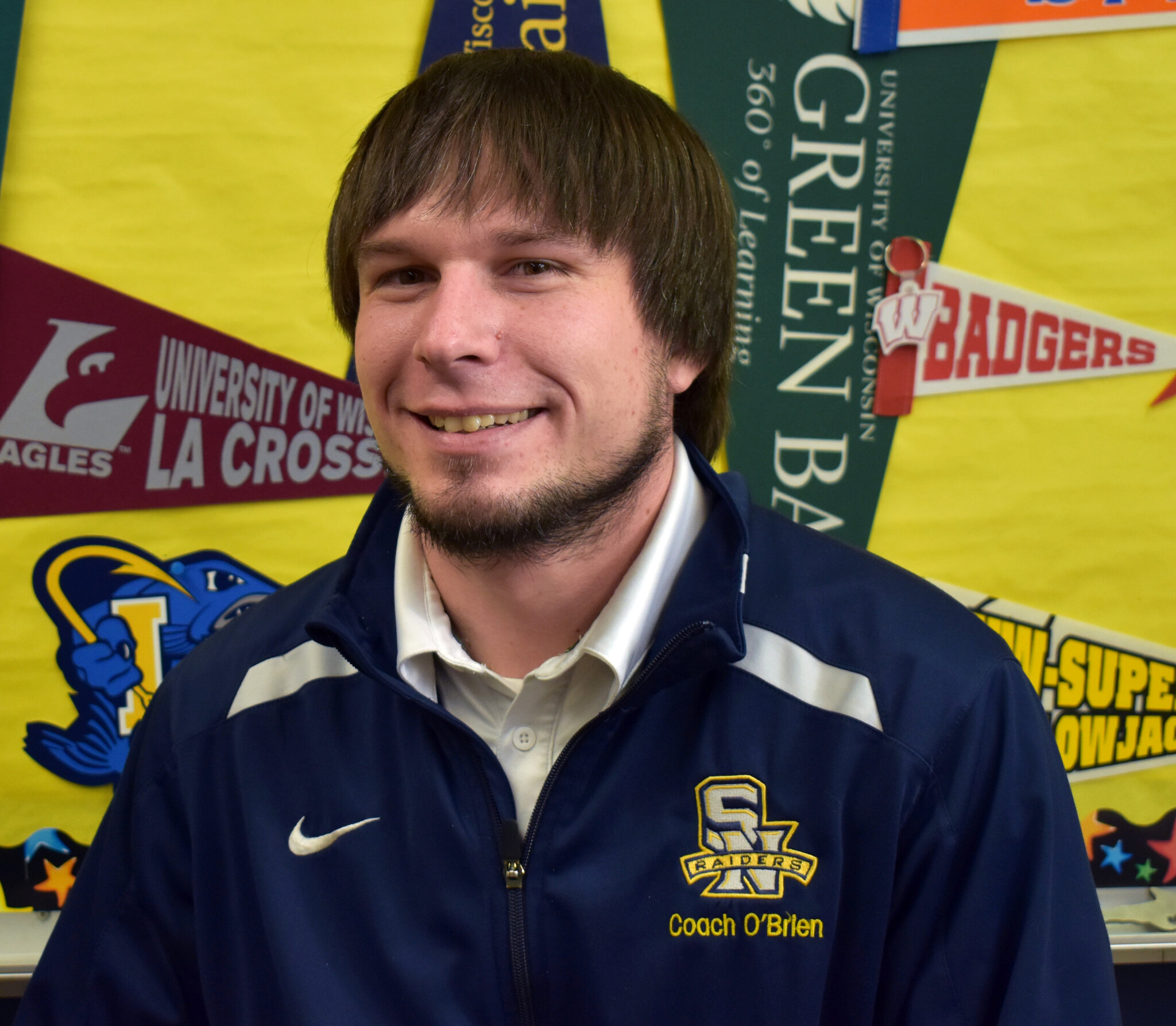 Note: Lakeland has a tradition of welcoming students from all over the world to Sheboygan County, and many choose to call this region home. This is the latest in an ongoing series profiling Muskies who have decided to settle locally after graduation.

Joe O’Brien made a positive impact during his time at Lakeland, and he has wasted no time having that same positive impact in the community as a counselor and coach at Sheboygan North High School.

The Cary, Ill., native, who graduated with his Lakeland undergraduate degree in 2010 and his master of arts in counseling in 2013, was one of 100 Wisconsin educators chosen this year for a Herb Kohl Teacher Fellowship.

These annual awards recognize teachers who have demonstrated superior ability to inspire a love of learning in their students, have motivated others and have provided meritorious service both inside and outside the classroom. This fellowship was established by philanthropist and businessman Herb Kohl in 1990.

O’Brien works with students individually and in small groups on academic and career planning, social/emotional well-being and a number of other areas. He is also North’s head football coach and assistant track and field coach.

O’Brien said just being nominated for this award is an honor, let alone winning. “My passion has and will always be in the art of helping others,” he said. “As a school counselor, I am fortunate to have the opportunity to work with all of the stakeholders in the educational community at large. I was taught from a young age that hard work pays off and never goes unnoticed.

“My passion has and will always be in the art of helping others,” he said. “As a school counselor, I am fortunate to have the opportunity to work with all of the stakeholders in the educational community at large. I was taught from a young age that hard work pays off and never goes unnoticed.

“Senator Kohl's own work ethic produced the successes that made it possible for him to provide this great annual award to educators across the state. I want to thank Senator Kohl, Lakeland University, the Sheboygan Area School District and North High faculty and staff, my direct and extended family, my friends and my wife. Without the people in my life and all I have learned from them, none of this would be possible.”

O’Brien and Lakeland found one another thanks to football, and he says the people are what brought him to Lakeland. He was recruited by then-head football coach Jim Zebrowski, who visited him at Cary-Grove High School three times to talk life and football.

“I visited the campus three times during the second semester and can remember the first campus tour with then-graduate assistant coach Brent Luebke,” O’Brien said. “On that tour, everyone, and I do mean everyone, said hello. It was one of the most welcoming experiences I have ever had.

“From day one, I felt like I was at home on campus. The affordability and the intimate class sizes is what made the decision easy for me.”

O’Brien has many memories from his Lakeland undergraduate experience, including winning two football conference championships, three Cheese Bowl wins, serving as team captain and twice winning Lakeland football’s Fighting Muskie of the Year award. Off the field, he presented research at the American Psychological Association Conference in Chicago, and he was an active member in the Psychology Club and Mu Lambda Sigma Fraternity.

He also met his future wife and best friend, Megan.

An early-career injury helped the stars align perfectly for O’Brien to continue his education after earning his undergrad degree. He was a medical redshirt his freshman year due to a torn ACL, and given his love for football, he was determined to use all four years of eligibility.

After graduating with a bachelor’s in psychology, he enrolled in Lakeland’s MAC program and played his final season as a graduate student. After his playing days were done, he was hired as the defensive graduate assistant football coach.

Asked to name some of the special people who played key roles during his time at Lakeland, O’Brien said it would be impossible to name them all. “There were so many people that made my experience at Lakeland special, and those relationships are going strong today,” he said. “My football coaches, my professors, the faculty and staff that I worked directly with, and, of course, the athletic trainers, all played a key role in my success and in the development of who I am today.”

Those relationships, O’Brien said, prepared him for where he is today.

“The genuineness of the people taught me not only how to form quality relationships, but also the importance of each of those relationships,” he said. “There is a true sense of pride at Lakeland in maintaining the beauty on campus. Everyone has a role, and together make it a special place to live and receive an education.”

By the time he completed his counseling degree, Lakeland and this area had been his home for seven years, so the region had become very familiar. He was hired at Chilton Middle School in 2013 and served as the school counselor there for one year, and his wife had a job in Sheboygan. One year later, he landed a role at North High School, and Sheboygan has become home.

“I have always enjoyed being outdoors, and there is so much beauty right here in Sheboygan County,” O’Brien said. “I truly appreciate the Sheboygan community. As a school counselor, I am able to collaborate with so many great people in the area that all share in the vision of continuous improvement.

“It is exciting to bring ideas to the table, collaborate with so many great people across many industries and to participate in making Sheboygan one of the best places to live and learn.”

After starring in the NFL, Ahman Green turns his eyes to eSports