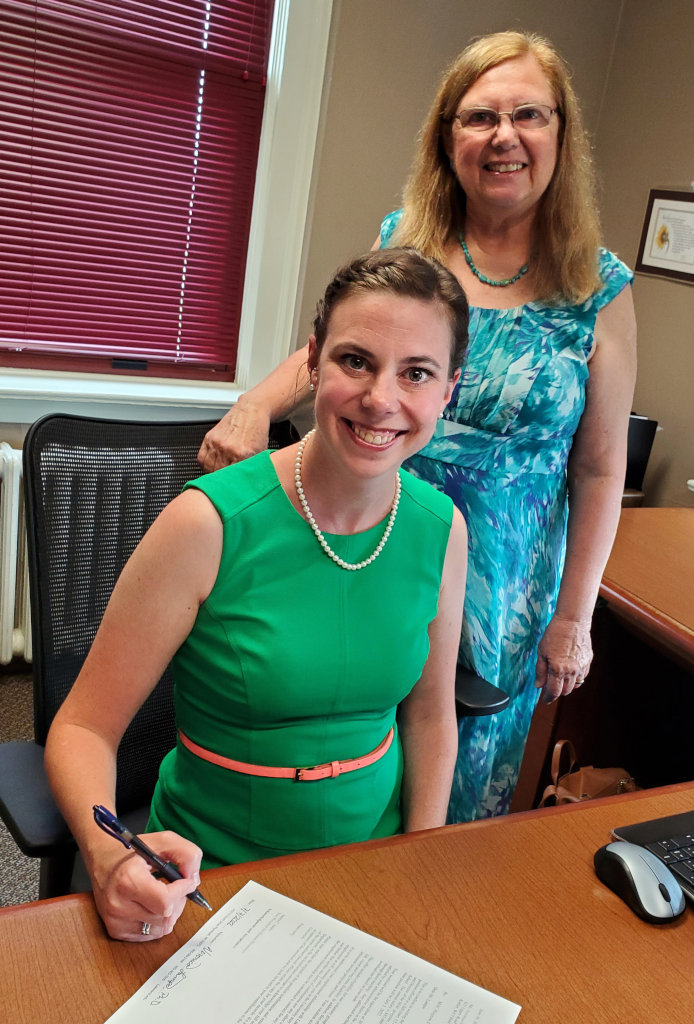 When it was time for Veronica (Hilke) Lampe MAC ’07 to sign her contract as Lakeland’s director of the Master of Arts in Counseling program, she had a sentimental request for the human resources department.

Lampe signed her agreement on July 7, 2022, 45 years to the day that her mother, Lakeland Faculty Emerita Eileen Hilke, signed her first contract to teach at Lakeland.

“I asked HR if we could do it on 7-7 to honor the legacy of my mom’s time at Lakeland,” said Lampe, who has been serving as interim director of LU’s MAC program for the last year and an adjunct instructor for Lakeland since 2014.

Her parents, Tom and Eileen, joined her for a special moment Thursday in her office at Lakeland’s campus.

Eileen recalled waiting until 7-7-77 to sign her first agreement with Lakeland.

“I knew it would be a lucky day, and it was lucky,” she said, reflecting on her tenure at Lakeland.

Hilke, who retired as a full-time faculty member of Lakeland’s education faculty in 2010, holds a special place in the institution’s history – she was the first female to be named a full professor, and she initiated the college’s first graduate course. She was named faculty emeritus, the highest honor for a faculty member, at commencement in 2010.

Hilke chaired Lakeland’s education division for 19 years, and supervised Lakeland’s student teacher program for over three decades. Known for her enthusiastic approach with students, especially those studying to become elementary school teachers, she had a dramatic impact on hundreds of teachers.

Lampe completed her Lakeland master’s in counseling with a higher education emphasis in 2007, shortly after receiving a bachelor’s in theater from Elmhurst University. Lampe later returned to Lakeland to complete her coursework for a DPI school counseling license. She has a Ph.D. in human studies-counseling from Capella University.

She previously worked in teaching and counseling roles at Christ Child Academy and Seton School in Sheboygan, with Associated Psychological Health Servies, Lakeshore Technical College and the Kiel Public Schools.