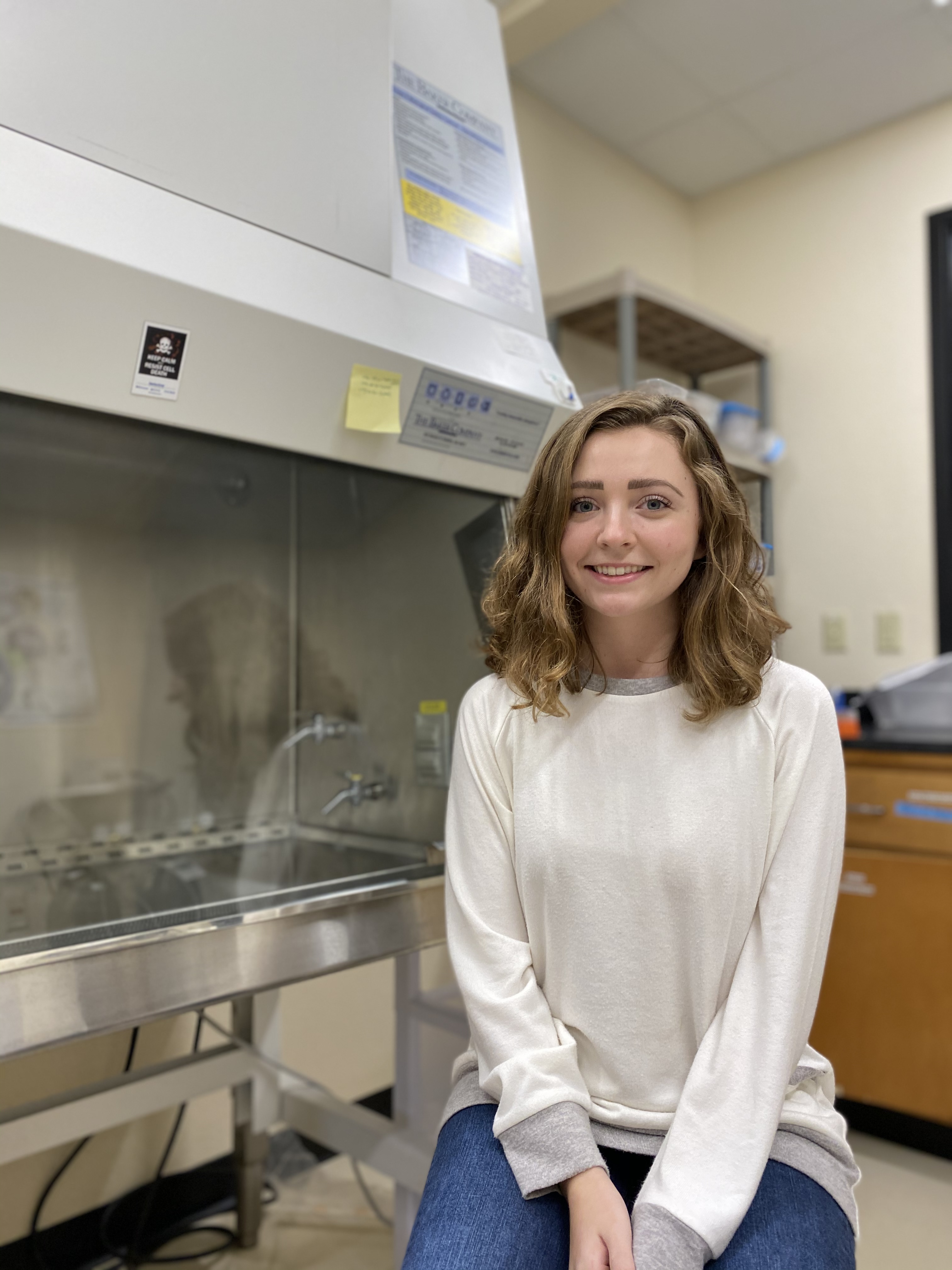 As Tegan Schneider works toward her dream job of becoming a physician assistant, the December Lakeland graduate has done her part to leave her alma mater in a better place than she found it.

Schneider created a cost analysis for implementing a solar energy system and green roof on the Chase Science Center for her Senior Honors Project, an effort to increase eco-friendly options at Lakeland’s main campus.

The biology major from nearby Plymouth, Wis., has always had a special interest in eco-friendly environments and sustainability, and she became motivated to help LU do more from the moment she stepped on campus as a freshman. A directed reading on green energy sources she did as a junior with LU Assistant Professor of Chemistry Amelia Fitzsimmons helped her focus that passion into her Honors Project.

“I learned that rural, Midwestern areas, such as Lakeland, are perfect for green-energy implementation because these areas rely heavily on fossil fuel energy sources,” said Schneider, a Sheboygan County Scholar who graduated with a health science emphasis as part of her major, and a minor in psychology.

“After learning this information, I dove right into forming a cost analysis for solar energy and green roof implementation at Lakeland.”

Her final project maps out the cost of both systems, including materials, installation and maintenance, and compares these costs to how much the system would save in energy cost annually.

Schneider’s research started with an in-depth look at solar energy systems that included creation of a 3D model of polycrystalline silicon solar cells that led to a working solar panel to put her research to work.

“That was a time-consuming process of constructing, deconstructing and reconstructing many prototypes before I finally had a working solar panel,” Schneider said.

The project also studied wind energy and green roofs. With help from the Sheboygan County Gardening Club, Schneider discovered a type of succulent plant that grows year-round in Wisconsin. Schneider purchased 1,000 seeds of this succulent, created a garden box and planted every seed. The plants survived the elements outside from March through December.

The next step was contacting solar companies in Wisconsin, and she eventually connected with Arch Electric based in Plymouth. Andrew Holmstrom of Arch Electric determined that Chase’s roof can support a solar system, and he measured the roof and created a solar system demo that would fit perfectly on Chase, which led to Schneider constructing the cost analysis.

“Andrew designed the entire system to scale, produced tables and figures laying out the cost and paybacks, and even put his own version of a cost analysis together,” Schneider said. “I am still in disbelief over how wonderful my experience with Arch Electric was.”

“I was hoping to combine the green roof with the solar system to make an integrated system, but with the specific panels that the local solar company uses, an integrated system is not feasible, and there is not enough roof on Chase to do both,” Schneider said. “I still included the cost analysis for a green roof that would cover every inch of Chase’s rooftop. This way, if Lakeland wanted to implement a green roof elsewhere, they would have a ballpark idea of how much such a system would cost.”

“Although the initial cost of a solar system is expensive, there are so many companies and grant programs out there that really want universities to be more eco-friendly,” she said. “Even without the hundreds of thousands of dollars available in grants, I strongly believe that green energy is a worthwhile financial investment.”

Fitzsimmons served as Schneider’s project supervisor and helped her learn a new level of understanding for green energy.

“Although I have always loved the idea of being eco-friendly and sustainable, I have never done research on the topic this in-depth before,” Schneider said. “I had no idea how solar systems or green roofs worked, and Dr. Fitzsimmons’ patient and effective teaching style really helped me grasp this understanding.”

Fitzsimmons said the quality of Schneider’s work was outstanding, especially considering she built a working mini-solar panel model in the midst of the COVID-19 pandemic, which limited in-person meetings.

“I think Lakeland’s administration and faculty take these kinds of ideas from students seriously,” Fitzsimmons said. “Whereas at a larger university a student might write up a project like this and then have it just sit on a shelf, because we are a smaller community, there is a good chance the people who make decisions about our electricity use will actually get to see her proposal and consider it seriously.”

Scott Niederjohn, Lakeland’s senior vice president for advancement and Cooperative Education, was also a member of Schneider’s team, and he applauded her cost analysis.

“Tegan worked closely with solar energy vendors to acquire accurate estimates and she researched grants and incentive programs to provide the fastest break-even/payback time frame,” Niederjohn said. “It led to a very complete job that considers all possible costs.”

Schneider aspires to be a physician assistant sub-specializing in neurosurgery, and she will apply to the PA program at the University of North Dakota’s School of Medicine later this spring. Admittance into that program requires 1,000 hours of patient experience, so that is her current focus.

As she prepares for these next steps, Schneider said the faculty in Lakeland’s science program have her well prepared to tackle her career goals.

“Students here are able to build great relationships with the professors, and these relationships and the professors’ expertise really helped propel me and keep me on track during this project,” Schneider said. “Dr. Fitzsimmons was wonderful in teaching me the physics and the chemistry behind solar cells, and most of these lessons related to material I learned in previous classes.

“Any time I was stuck on something I felt comfortable enough to consult the other science professors. These professors have lent me tools, workspace advice, and a lot of their time. I talk up Lakeland’s science program to anyone who is willing to listen.”