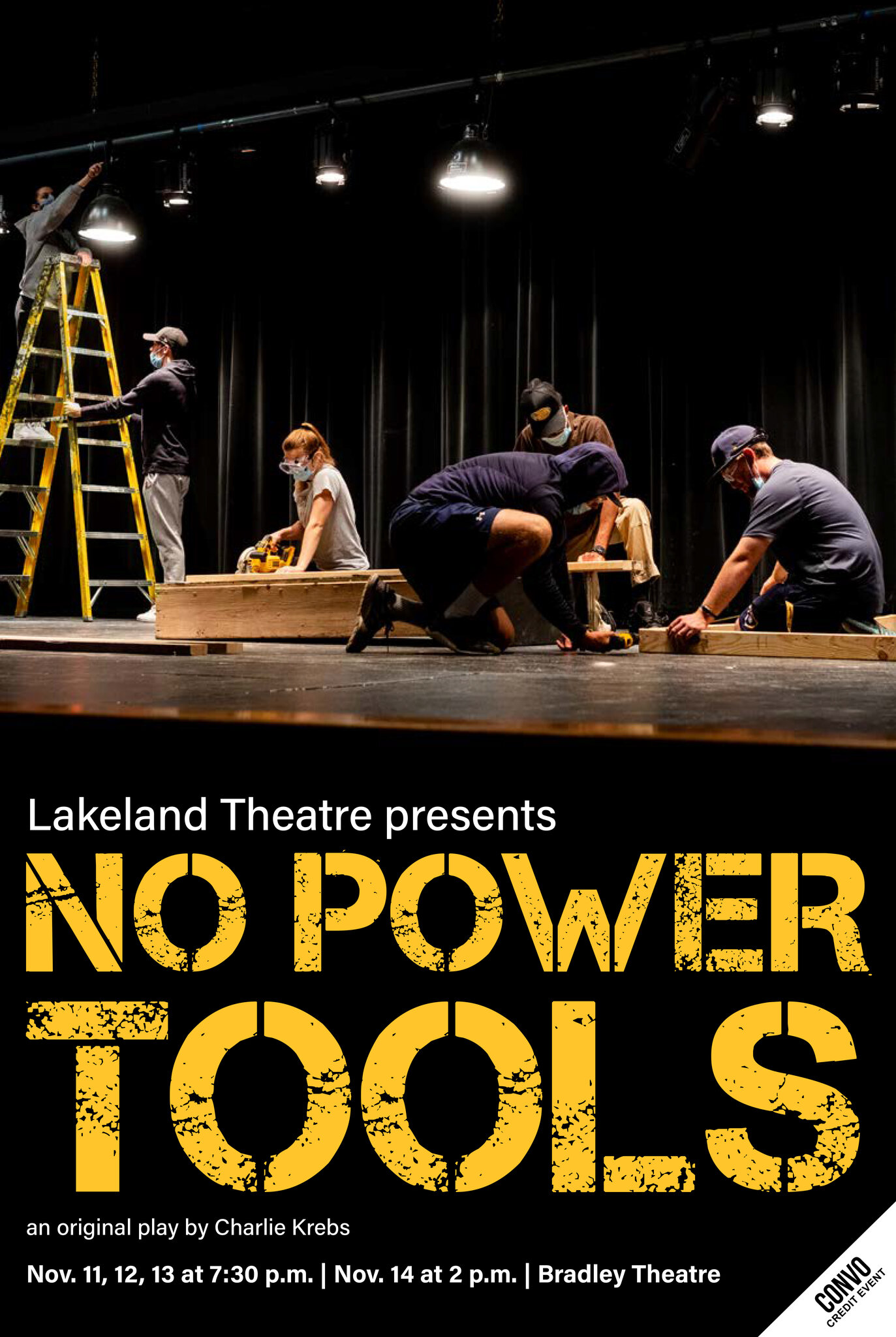 Charlie Krebs has only been writing his play "No Power Tools" for the last few years. But this is a story 46 years in the making.

As the final fall play in his distinguished 40-plus year career in theater, Lakeland University will present the world premiere of Krebs’ “No Power Tools” on November 11-14 at the Bradley Theatre.

Set in the mid-1970s, the story introduces a group of technical theatre majors and is loosely based on Krebs’ time an undergraduate theatre major at the State University of New York (SUNY) at Fredonia.

Audiences will meet a group of friends who, while they’re working, talk about their philosophies of life and how they’re learning to have relationships. The central character has experienced a traumatic family loss, and as the play proceeds, “Power Tools” comes to represent the negative self-talk he’s having in his head.

“Throughout the play, the main character’s best friends try to get him to let go of that self-talk – those power tools – to get rid of the demons and ghosts of what happened with his family,” Krebs said.

“No Power Tools” was scheduled to be the 2020 fall play at Lakeland, but when COVID scrapped the production, Krebs, who joined Lakeland’s faculty in 2007, decided to postpone his retirement for a year so he could bring the play to the Bradley stage.

Anyone who knows Krebs knows that producing and directing shows is a labor of love. But he admits that this show, which provides insight into a defining time in his life, has been different.

“It started the night of auditions,” Krebs said. “For years, I had only heard all the words of the play in my head. Suddenly, I was hearing them come out of people’s mouths and it hit me like a brick. I get emotional just thinking about it.

“I am anticipating it being very difficult for this show to be over with.”

The idea for the show came during a visit six years ago with his brother and sister-in-law on a trip to Keuka Lake, part of the Finger Lakes in Western New York. The play is largely fictional, but Krebs’ SUNY classmates and two of his former theatre professors inspired the show’s characters and dialogue.

“When I was a freshman, I was a Spanish and French major,” Krebs said. “My second semester I auditioned for a play. I only wanted a small part, but I got cast as the lead. At the end of that show, these two professors asked me if I would change major. That’s when everything changed.

“This represents a coming of age for me. There are little pieces of my life in this show.”

The show’s title has a special meaning. Krebs and his fellow techies were often hired to load in and out the bands performing at the universities’ concert hall, thereby taking on the role of roadies. In 1977, Jackson Browne released “The Load Out,” a song dedicated to his roadies. Krebs said he and his co-workers often listened to the radio while working.

“Whenever ‘The Load Out’ came on the radio, someone would yell ‘No power tools’ and we turned off all of our saws and other noise-producing tools so we could sing along with the song,” Krebs said.

Krebs has kept in touch with those two professors, as well as another fellow student, and they’re aware of his play and this production. He’s confident they would see some of themselves in the show, but he was careful not to create an impossible situation for the show’s actors.

“I wrote the characters so I wasn’t creating ‘this person’ or ‘that person’ so the actors could make the characters their own,” Krebs said. “We have an amazing cast. I didn’t want them to think they could only play it the way I envisioned it.

“When I was writing this I could tell when I felt good about it because it just wrote itself. A lot of the dialogue for this piece just sort of visited me. In a way, it felt like I did not write it.”

The two-hour show covers a year and a half of time. Period costumes and furniture will help set up the story, as well as a mix of popular music from 1975 that Krebs said is sure to spark memories for audience members familiar with that era.

This is the second plays Krebs has written that he’s staged at Lakeland, the first being “Soli Deo Gloria” in the fall of 2012 to help celebrate Lakeland’s 150th anniversary. He produced and directed a third play he’d written when he was theatre director at the University of Wisconsin-Sheboygan and he’s written several other shows.

“It’s remarkable to have the chance Lakeland has given me to make this come alive,” Krebs said. “This was part of my life for several years, and it’s going to be very emotional to see it come to life on the stage.”