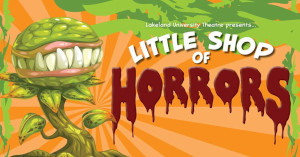 Imagine Dr. Faustus selling his soul to the devil, but as a doo-wop, blood-sucking rock musical comedy. Lakeland University Theatre will present the popular musical "Little Shop of Horrors" as its spring production.

Tickets are $15 for adults, $12 for senior citizens and $8 for non-Lakeland students and can be purchased online at Lakeland.edu/tickets or at the box office before the performance.

A geek named Seymour finds a Venus Flytrap seedling one day after a solar eclipse and brings it to the flower shop where he works. He nurses it to health with his own blood (it seemed so innocent at first).

He names the plant Audrey to impress the girl he likes who, of course, also works there. Like Faust, he sells his soul to the devil (the plant) and as it grows its appetite goes beyond a few harmless drops of blood to an insatiable need for human flesh. And it goes downhill from there, but with a great rock soundtrack.

"Underneath it all is a timeless tale of love which is unfortunately doomed from the start, though Audrey and Seymour don't know that," said Lakeland Theatre director Charlie Krebs. "I'm drawn to the show in the same way I was drawn to chasing firetrucks as a kid – you know it's not going to end well, but you can't not look."

"Little Shop of Horrors" is riddled with intrigue, fraught with peril and takes place "down on skid row" where richly written and colorful characters crash in and out of each others' lives.

"The ingenious music is infectious, funny and moving and the whole play is written with stunning craft," Krebs said.

The cast lost a week's rehearsal due to the winter weather and university closures, but Krebs said the group rallied in a way that pleasantly surprised him.

"Somehow, that forced us to make up for lost time, and ideas from everyone involved came together in a collision of invention and creativity," Krebs said. "The cast is superb and had a creative chemistry the likes of which I've not seen in a long time."