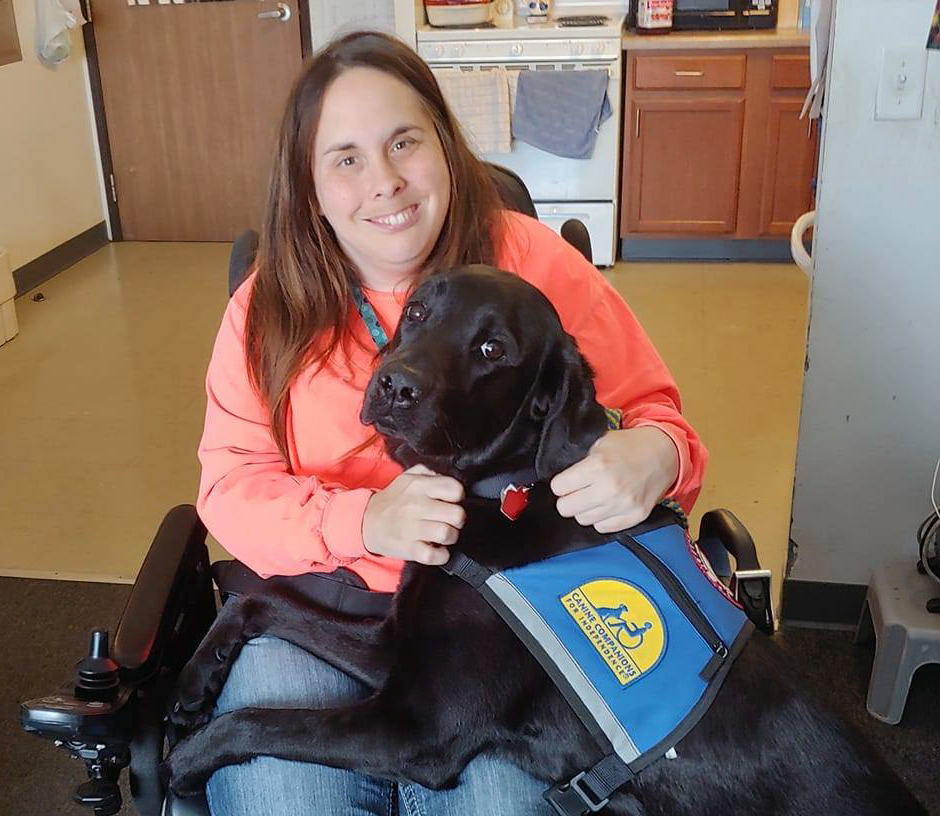 There are many times during her journey to a Lakeland University master’s degree in counseling that Chris Engstrom could have given up.

Her spastic quadriplegia Cerebral Palsy is always a challenge, and she needs home healthcare and public transportation for daily basics that many people take for granted. It has consistently presented barriers throughout her educational journey.

She could have quit following a cancer diagnosis in the fall of 2019 that led to hospitalization and threatened to cut her academic journey short.

Engstrom relies on her service dog, Tayla, to mitigate the effects of her CP by picking up items, opening doors and carrying things as needed. She also deals with anxiety disorder, and Tayla helps her focus to get through her day.

Through it all, Engstrom consistently returns to one key trait that defines her – resilience.

Engstrom, who lives independently in Green Bay, Wis., is in the final stages of finishing her portfolio, the last piece of completing a master’s degree in counseling from Lakeland that will qualify her for licensure as a school counselor.

“As humans, we can make lots of connections between one another,” Engstrom said. “I’ve learned so much from so many people and it’s my responsibility to teach that to the next generation. This degree been a long time coming for me. It’s not just getting a piece paper. It’s what I was born to do, and I 100 percent know that.”

Her quest to be a counselor dates back to 2005 when she graduated from the University of Wisconsin-Green Bay with a bachelor’s degree in psychology and human development. She immediately enrolled in a master’s degree in counseling program at another school, but due to a variety of challenges, she did not finish.

That’s when the resilience really started kicking in.

Engstrom sought out a new graduate program with night classes that fit her work schedule and provided a support system that could deliver an education despite her life challenges. Engstrom said Lakeland has played a huge role in her success.

Following her cancer diagnosis, Engstrom was in the midst of fall classes and suddenly facing 22 rounds of chemotherapy weekly. She called one of her LU main professors, Julie Hodges, from the hospital to explain that she needed to miss some classes due to her treatment.

“I said ‘I don’t know how I’m going to finish this class’ and Julie said ‘We’re going to get you through it,’” Engstrom said. “She saw my ability and was willing to work with me by coming on different days to meet with me. I ended up taking my final exam that semester with the rest of my classmates and I did really well.”

Engstrom also cited another Lakeland MAC adjunct, Lisa Koenecke, for being instrumental in helping her finish the program.

“Julie and Lisa have spent many years in the schools, and they gave me confidence that I have the skills and abilities to be a great school counselor,” Engstrom said.

Engstrom has recently mourned the deaths of her father and her aunt, and again Lakeland professors rallied to make sure she stayed on track.

“Dr. (Deborah) Bilzing has been amazing working with me,” Engstrom said. “Lakeland professors work with their students to take their individual goals and needs and find strengths to be successful. They have been able to help me achieve greatness.

“I’ve been able to communicate with professors honestly about the barriers I come up against and be open about what I need to be successful. They have helped me overcome those barriers. It’s been nothing but amazing.”

For years, Engstrom has channeled her disability into helping and inspiring others, especially young people.

She draws motivation from working with children she serves in her role with the Green Bay YMCA's 21C At-Risk After School Program, a partnership with the Green Bay Area Public School District. For nearly a decade she has assisted students with their social and emotional development, using the skills she’s learned at Lakeland and through overcoming her own challenges.

She’s a frequent speaker in Green Bay schools, talking about life with a service dog and encouraging students to have confidence, speak up and to be persistent to overcome personal obstacles.

“I had a lot of adverse child experiences, and I can connect well with those kids and teach them the skills and resilience to help them be successful,” Engstrom said. “Prior to Lakeland, I felt I could be a success, and now I know I will be a success because of the support and confidence I have gained in this program by overcoming all these obstacles.”

In 2015, she published a children’s book, “Original Orik and His Important Job,” which chronicled the life of her first service dog, Orik, through his eyes. She got Orik in 2008 and following his death she traveled to Ohio in the spring of 2019 where she worked with Canine Companions to get Tayla.

“Having a dog helps me take the good with the bad and understand that I don’t need to be perfect all the time,” Engstrom said. “I used our story to draw connections to students and talk about how they can overcome challenges and identify their strengths.”

With the finish line now in sight 17 years after earning her undergraduate degree, Engstrom is excited to apply for school counseling jobs and begin her next chapter

“It's been a fun ride, a wonderful journey,” she said. “This is finally real.”