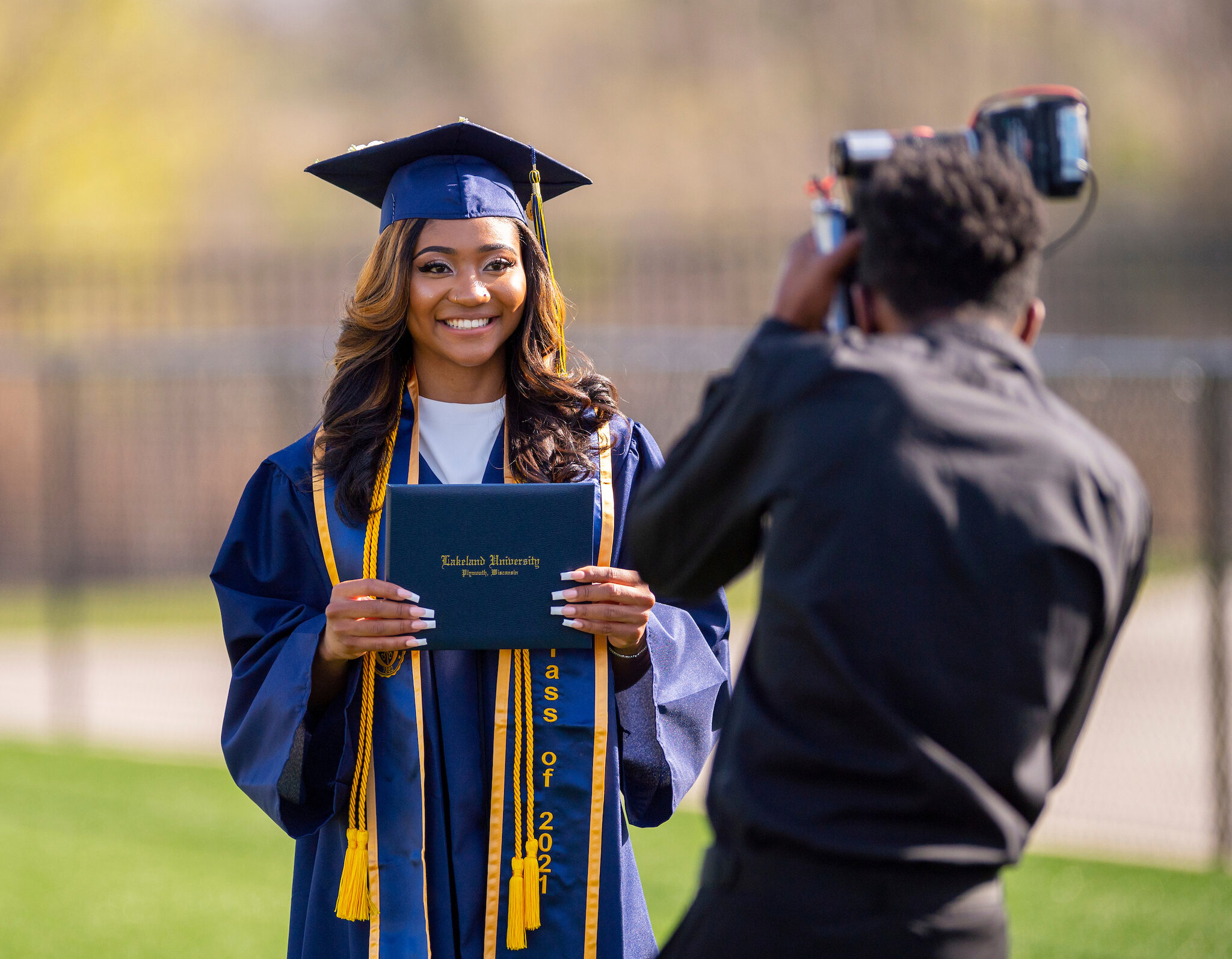 Lakeland University awarded degrees to nearly 700 students on Saturday, May 1, at the institution’s 159th commencement.

Each in-person ceremony can be watched under the on-demand tab at https://portal.stretchinternet.com/Lakeland/.

Students getting degrees Saturday took classes at Lakeland’s main campus in Sheboygan County, through seven centers located throughout Wisconsin and/or through online programming.

As part of the ceremony, Lakeland honored two of its own.

David Black, who served as Lakeland’s president twice and is retiring at the end of this academic year, was named President Emeritus. Black’s two presidencies – from 1989-97 and 2017-21 – saw some of the most significant growth in Lakeland’s history.

Enrollment nearly doubled during his first tenure, thanks in part to development of Lakeland’s first graduate programs (the Master of Education and Master of Business Administration), the founding of Lakeland’s Tokyo, Japan, campus in 1991, significant building projects on the Main Campus and expansion of the evening and online programs.

During this second tenure, he led the introduction of Lakeland’s Cooperative Education program, which led to several of the largest freshman classes in Lakeland’s history, growth of LU’s Tokyo campus to a four-year degree program and securing a USDA loan to fund expansion of the largest building project in the history of the main campus.

Mehraban Khodavandi, who retired at the end of the 2019-20 academic year after 39 years as a member of Lakeland’s faculty, was named professor emeritus. Khodavandi led and developed the institution’s education program, and when he retired he served as professor of education and psychology, director of Graduate Education Programs and Senior Fellow of the Center for Advanced Disciplinary Studies.

These were the latest in a long list of roles he served since arriving at Lakeland in 1981. One of Lakeland’s most beloved professors, he won the 1997 Underkofler Excellence in Teaching Award, is a multi-time winner of Lakeland's Outstanding Professor of the Year and a winner of the Alumni Association Outstanding Faculty Member award.

All three received an honorary Doctor of Humane Letters.

Zemke, a veteran educator at all levels, is known worldwide for her significant work in the Kodaly method of music education. She founded the Kodály Certificate Program at Holy Family College, making it among the first Kodály training programs in the U.S. and a model for future training programs. She also started the Master of Music program with a Kodály Emphasis at Holy Family College, which is now offered by Lakeland University.

She is a founder of the Organization of American Kodály Educators, Midwest Kodály Music Educators of America and Association of Wisconsin Area Kodály Educators. She has received numerous honors for her service and leadership and has published many articles and books on a variety of topics in the field of music education.

Pierce, a Missouri native, graduated from Lakeland in 1970 with a bachelor’s in elementary education following a Hall of Fame basketball career. He has more than 45 years of experience as an award-winning professor, coach, athletic administrator and consultant. He has provided service to Lakeland over the years through his participation and leadership of the annual Blaster’s golf tournament and eight years of service as a trustee.

He was director of athletics at Maryville University of Saint Louis for 20 years and worked at the university for 27 years, helping build the athletics and facilities programs from the ground up. He also served as head coach for basketball and golf, guiding teams to several conference championships. He helped Maryville join the NCAA Division III in 1978 and helped establish the St. Louis Intercollegiate Athletic Conference in 1991.

Gentine is a third-generation owner of Sargento Foods and served as president and chief customer officer for four years before becoming CEO in 2014. He has worked at Sargento in many capacities – from washing trucks in high school to working on the production lines, in accounts receivable and in retail sales during college. He also worked outside the company as a commercial lender for three years.

He is on numerous boards within the food industry, and has significant involvement in the Sheboygan County community. His father, Lou Gentine, delivered Lakeland’s commencement address in 2011 and awarded an honorary doctor of laws degree

Leading through a Pandemic: Perspectives of Wisconsin Executives