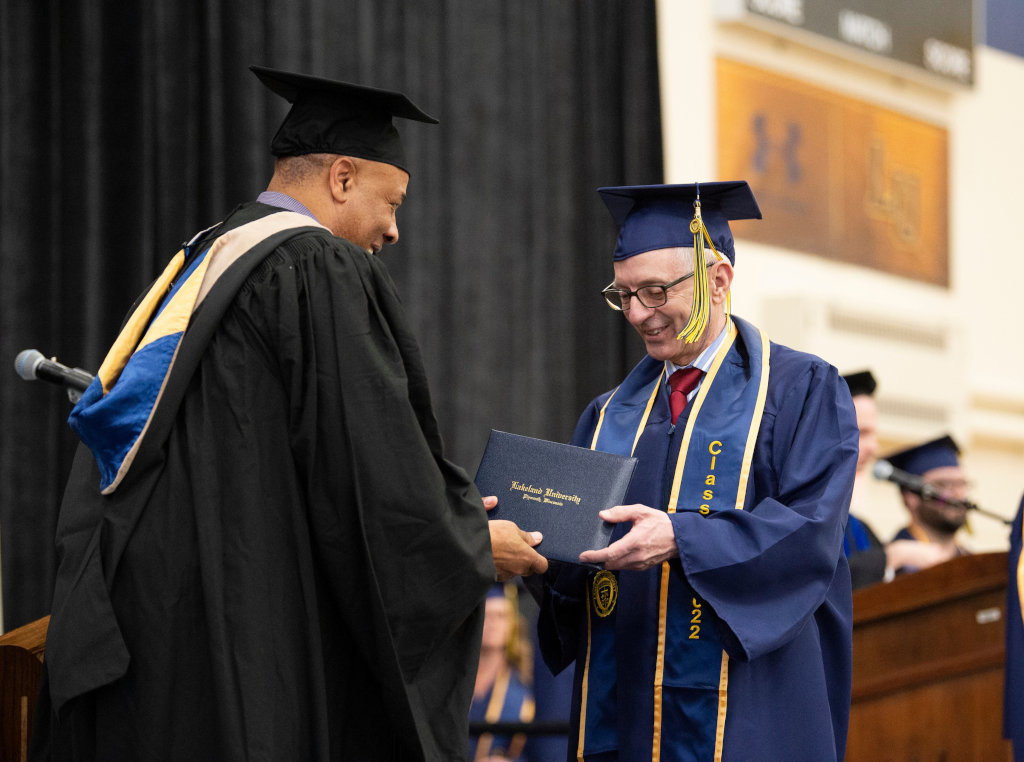 When Bohdan Zachary crossed the stage at Lakeland University on Saturday to receive his bachelor's degree, it was the completion of a promise he made to his parents nearly 50 years ago.

How fitting it would happen during Mother's Day weekend.

Zachary, an award-winning television veteran who currently serves as vice president and general manager at Milwaukee PBS, received a bachelor's in communication as part of Lakeland's 160th Commencement.

It was the latest accomplishment of a first-generation Ukrainian American whose parents survived the Nazis and World War II and immigrated penniless to the United States. As a young man, Zachary walked away from a four-year college scholarship to pursue a career his parents didn't initially understand, but he always promised them he would complete his degree.

"The day I won my first Emmy award, I shipped it to the house, and they carried it to their dying day," said Zachary, 65. "They said, ‘You've achieved it,' but I told them ‘You've always wanted me to have my degree.'

"They're both gone, but in their honor, I did this. And I wanted to do it for my own self to have completion as part of my adventures in life. I hope they are watching. I'd love to believe they'll be there in spirit to see their son graduate."

The path to get to his degree is a fantastic journey that includes music icon David Bowie, movie star Cher and a distinguished career in television and media.

The passion that fueled Zachary started at Immaculate Conception Ukrainian Catholic High School outside of Detroit, Mich., where he served as the publisher, primary writer and photographer for his school newspaper. He also made short films with a Super 8 camera. Thanks to his strong academic performance, Zachary received a four-year scholarship to attend Wayne State University in Detroit, and in the eyes of his parents, Wolodymyr and Olga Zacharij, graduating from college was non-negotiable.

"The guidance counselor said, ‘If you want be an engineer or dentist, they'll provide for your lifetime,'" Zachary recalls. "In my heart of hearts, I knew I didn't want to do either one of those. I didn't even know what journalism or TV production was at that time. My parents just didn't want to hear about it. I had gotten a scholarship and to them that meant I was really smart."

A series of fortuitous meetings set Zachary's career in motion.

He was a member of a rock band in college and met David Bowie's manager, who told him, "You're really a New Yorker, that's where you should be."

With $50 to his name in 1975, Zachary dropped out of Wayne State, packed a bag and ran away to New York City with plans to "find my life and career" at New York University. He was a skilled typist who went to work for a temp agency, and he begged for an assignment that had come in from CBS News.

"The day I met the two producers I was assigned to work for was the start of my career," Zachary said.

His bosses became his mentors, quickly dispelling the notion of Zachary attending NYU and instead teaching him storytelling and TV production. That led to a role at WNBC producing the highest rated TV newscast in New York City for six years.

From there he moved to Los Angeles and got connected with Cher, who, at the zenith of her acting career, launched a film development company. She hired Zachary as her first executive vice president and for two years he researched news and literary projects as possible future films that would star the award-winning actress.

"I didn't believe it would happen until I was sitting in her house," Zachary said. "We were talking and I kept waiting for questions because I thought this was a job interview. Finally, she said, ‘So, how'd you like to start on Monday?'"

From there he landed a series of producer roles and also founded North South Films, which made educational films for non-profit health organizations. He spent two years as a director and producer with E! Entertainment Television.

A decade removed from his New York experience, Zachary reconnected with his former boss at WNBC who encouraged him to leave commercial TV for public TV. Zachary spent nearly 20 years at KCET, the most-watched independent public television station in southern California and the second most-watched independent public television station in the nation, rising to the role of senior vice president, broadcasting, programming & syndication.

In 2015, he was recruited to Milwaukee by Milwaukee Area Technical College president Vicki Martin, and he leads the team that operates WMVS and WMVT, which are licensed to MATC.

His two-plus decades in public TV have allowed him to come full circle. Zachary grew up in Hamtramck, a predominantly Polish and Ukrainian village of immigrants, and he credits public television with being instrumental in helping his family learn English. For Zachary, Milwaukee PBS is an integral part of the community, not simply a media outlet.

He points to the powerful 30-minute documentary "Kids In Crisis" created in conjunction with a series of stories published by the Milwaukee Journal Sentinel about the mental health crisis faced by Wisconsin young people. The work led to two Wisconsin laws being passed.

"We featured four young people who had fought demons and survived," Zachary said. "They were unflinching and raw in telling us those stories. That's the kind of topic a commercial broadcaster might do a 3-minute story. We did it honestly, and it's one of my proudest moments. Parents have written us saying ‘Thank you, now I have a better understanding of this.'"

MATC's president not only brought Zachary to Wisconsin, she also led him to Lakeland. Martin had several meetings with then-LU President David Black to finalize some new partnerships and told Zachary it would be a good place to pursue his bachelor's. He enrolled in the summer of 2019 and took all his courses online.

"What I've loved about Lakeland is there were younger students along with folks in 40s and 50s," said Zachary, who has an associate degree in liberal arts and sciences from MATC and a certificate in creative writing from the UCLA extension.

"Even though we never met in person, in the online live format we had a chance to chat with each other and on discussion boards. One of my classmates talked about her grandkids. I felt very comfortable with all my classmates, and I very much appreciate and was supported by all my instructors."

Post-graduation, Zachary will take some time with his husband, Michael Carcieri, to celebrate this life milestone and plot his next steps, which may include a master's degree.

"I've always believed in the concept of lifelong learning," Zachary said. "The only difficulty is the last two weekends I wake up on Saturday and realize ‘Oh, I don't have a paper due by Sunday at midnight.' After four years of nonstop schooling, there is an emptiness from the regularity of what I was doing. 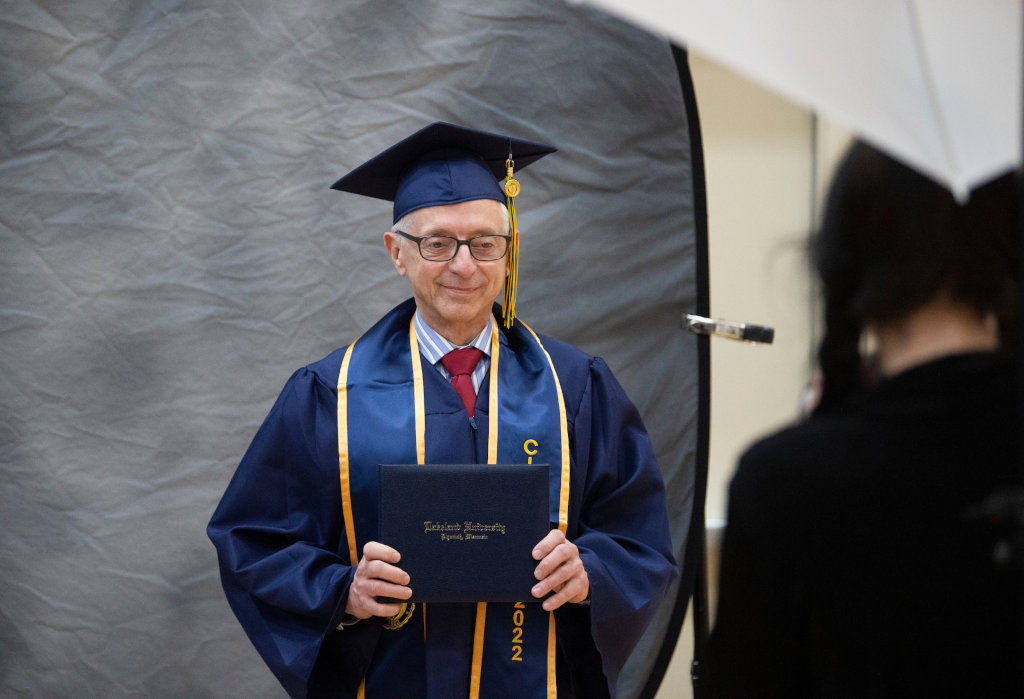