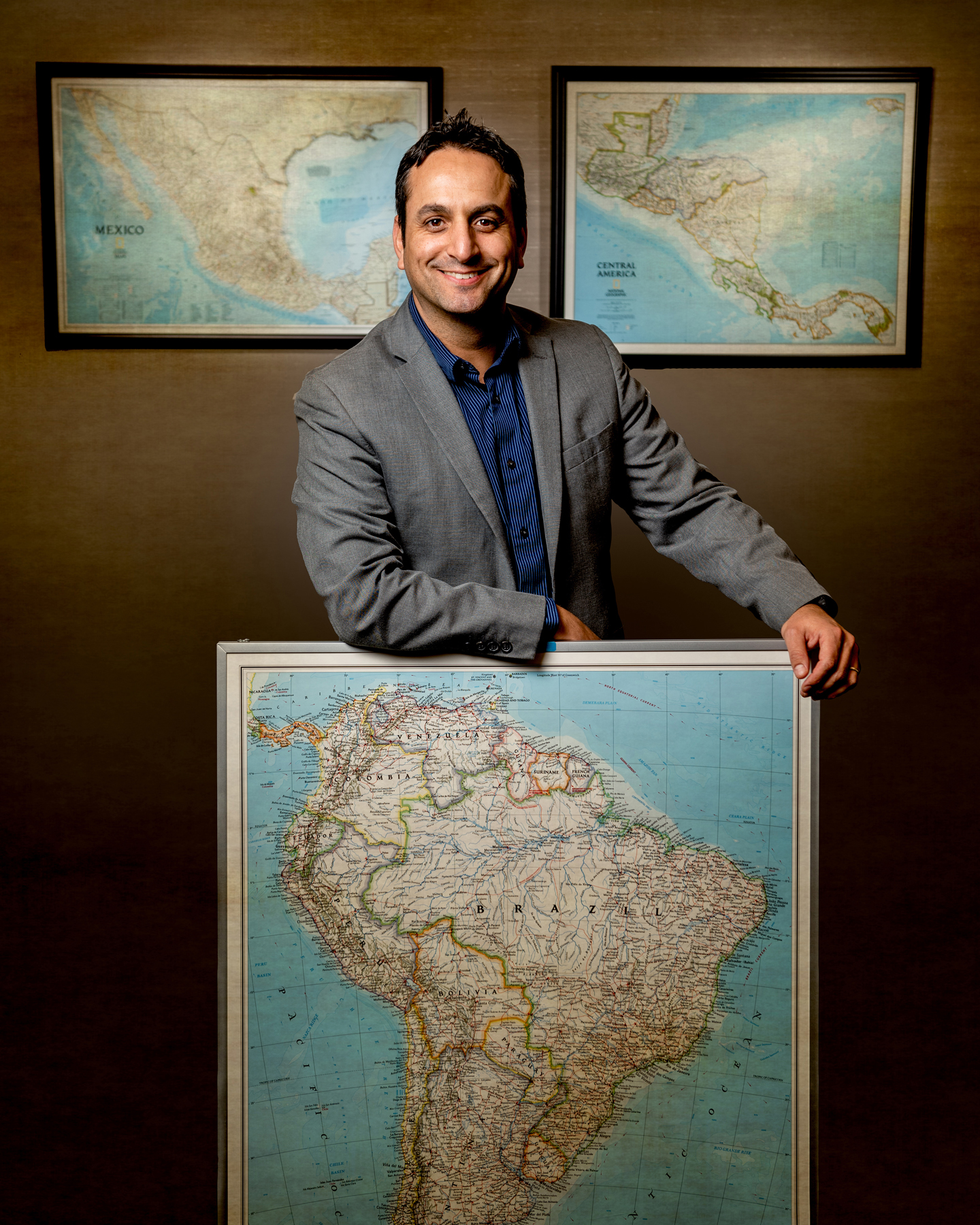 Editor’s note: Lakeland has a tradition of welcoming students from all over the world to Sheboygan County, and many choose to call this region home. This is the first in an ongoing series profiling Muskies who have decided to settle locally after graduation.

When José Araujo made his first visit to Lakeland in April of 2003 to visit his younger brother, Andres, he had no idea that his connection to what was initially his brother’s school would end up shaping his life.

Now, 17 years later, José, who received a bachelor’s (2005) and master’s degree (2009) from Lakeland, is enjoying life locally and thriving as associate channel marketing manager for Latin America at Kohler Co. and a community leader.

Andres, a 2006 and 2008 MBA Lakeland graduate, started classes at Lakeland in January of 2003, and José was participating in a work and travel program for international college students in New Hampshire. During a short visit to Lakeland, he met Andres’ closest friends, many of whom would become his own friends. He spoke to some professors and staff and got a feel for what Lakeland had to offer.

“At the time, I was a student at one of the largest universities in Peru, where I was majoring in science communications,” José said. “The classes there were rather large – in some lectures we had over 150 students. Professors were not accessible and the content was delivered in a ‘one size fits all’ way, which made for a very non-personalized experience.

“At Lakeland, students are recognized and valued for their individuality. Professors and staff are readily available and excited to help, making for a more personalized experience and allowing students to reach their own goals. This was very appealing to me, and one of the main reasons why I decided to transfer.”

José fondly recalls connecting with a number of faculty members, including the late J. Garland Schilcutt, Adina Schwartz, Elizabeth Shumway, Martha Schott, Jim Kudek and Charles Stockman, as well as Mark Wagner and Caroline Korhonen from the dining services staff and members of the maintenance crew, with whom he worked during the summers.

“Being able to interact and get to know people from all over the world was the most enriching for me,” said Araujo, who is giving back to Lakeland now as a member of LU’s Board of Trustees. “This allowed me to make lifelong friendships with people from different backgrounds and amazing life stories.

“Learning about other cultures, how to share a living space with some - one that may not think or do things like you are used to and realizing how people can sometimes be more alike than different, even though they come from the opposite side of the planet, was really eye-opening.”

The decision to settle locally took root when Araujo married his wife, Suki, in 2006, and the two decided that Sheboygan County, with its access to professional opportunities, safety, great schools, entertainment and activities, would be a great place to start a family.

“It is impressive to me that in a community of its size, there is such concentration of world-class companies that are leaders in their industry,” Araujo said. “Kohler, Sargento, Johnsonville, Bemis, Acuity, American Orthodontics are just a few corporations headquartered in Sheboygan County that offer an unbelievable amount of opportunities for professionals from all trades, levels of experience and interests.”

Araujo has put together an impressive resume since graduation. Prior to joining Kohler in 2015, he was program director for Partners for Community Development, Inc., in Sheboygan, and later he was senior associate director of the Hispanic Chamber of Commerce of Wisconsin. He has served Sheboygan County on a number of non-profit boards, and in 2019 he was named the Hispanic Professionals of Greater Milwaukee’s Community Leadership Award Winner.

In his current role, Araujo and his team are responsible for everything related to communications and the vitality of the Kohler brand in Latin America, including Mexico, Central America, the Caribbean and South America (excluding Brazil). Araujo and his team focuses on growing Kohler’s brand recognition in the region through a variety of branding activities and tactics, from showroom displays to social media and print publications, events and promotions.

His role at Kohler has Araujo interacting with people from all over the world on a regular basis, and he says his ability to successfully establish positive working relationships, communicate effectively and take into account nuances that are important to ensure the success of the business were honed at Lakeland.

“Aside from the academics, having the opportunity to live with people from different countries and cultural backgrounds taught me to be open minded, respectful of other cultures and beliefs and to analyze why people may act or do things differently,” he said.

Lakeland University’s business administration programs have been ranked #11 on the list of the 50 Best Business Degrees by Learn.org.