Train with award-winning artists in this first-of-its-kind experience at Lakeland University!

One lucky Broadway Bootcamp participant will be selected to receive a $750 scholarship to the Open Jar Institute! 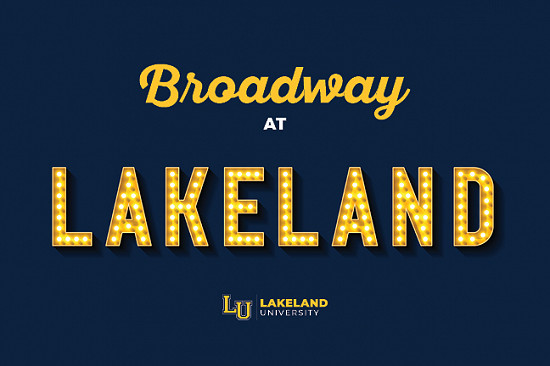 Led by Tony-nominated artists and Lakeland faculty, students will experience coaching by industry experts in voice, dance and acting.

Students will also receive practical advice for entering and working in the theatre industry from those who have and continue to work there.

Participants will rotate through workshops in voice, dance and acting followed by an afternoon intensive course and panel discussion with musical theatre professionals. Lunch will be provided for participants.

Broadway Bootcamp – Details for the Day

Our day will begin at 8 a.m. in the Bradley Theater where we’ll get organized for a day of learning and creativity.

After lunch, students will gather for a Masterclass session led by Sam, Derek, Jackie and James. Preference will be given to students performing Carner & Gregor songs. Students may request to participate in the masterclass by completing this Masterclass Participation Request. Forms are due by March 11. You will be asked to provide the following:

Following the masterclass, students will enjoy a Q&A session with the clinicians. Participants will receive practical advice for entering and working in the musical theater industry or find ways to enjoy musical theater as an avocational performer or advocate.

Optional campus tours will be offered at the conclusion of the day. 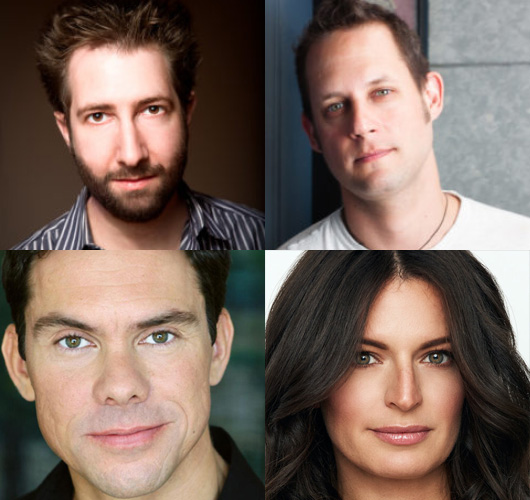 Sam Carner won the 2015 Kleban Prize for Most Promising Librettist. He received his BA from Yale University and received his MFA from NYU’s Graduate Musical Theatre Writing Program on a Departmental Fellowship.

In addition to his work with Derek Gregor, Sam wrote the children’s musical BARNYARD FOLLIES as a commission for the Children’s Theatre of Maine. BARNYARD FOLLIES won the Moonlit Wings International Playwriting Festival and was presented at children’s camps around the DC area in the summer of 2017, going on to a production at the Perth Youth Theatre in Australia, with more productions slated around the US for 2018.

His one-act play, BRADY, was performed at the University of Southern Maine, and his 1920′s-style college musical, JUST CALL ME ELI! won the John Golden Prize for Best Original Musical by a Yale Undergraduate in 2000.

Over the past several years, Sam has lectured regularly on various musical-theatre-related topics at Yale. Sam has taught Musical Theatre History and Analysis at NYU and Yale and songwriting at NYU

Derek Gregor received his BA from Skidmore College and his MFA from the NYU Tisch Graduate Musical Theatre Writing Program.

In addition to his work with Sam, Derek writes pop and country music with Selda Sahin (www.seldaandderek.com), and their work is performed frequently in Nashville, Los Angeles, and New York.

Derek and Selda wrote the score to the movie musical GRIND and the children’s musical HE SAID, SHE SAID, which toured the east coast in 2016.

He has written country music with Laura Bell Bundy, and one of their songs was recently featured on her CD, LONGING FOR A PLACE ALREADY GONE. He was a founding member of the rock band, M-Lab, which released the albums A BOLD AND HOPEFUL SPARK and FROM BASER ELEMENTS.

Derek has taught songwriting at NYU.

For Susan Stroman, James has served as her longtime associate choreographer/director, resident director/choreographer on many projects including the Mel Brooks musical The Producers and the world premiere of Young Frankenstein, the Musical, (recreating the direction/staging for the UK and US National Tours), the original Broadway production of Woody Allen’s Bullets Over Broadway as well as the Mandy Patinkin/Taylor Mac two-hander The Last Two People on Earth: An Apocalyptic Vaudeville at the American Repertory Theater. He was the associate choreographer for FATWA: The Musical, the show-within-the-show starring Lin Manuel Miranda, F.Murray Abraham and Larry David for HBO’s Curb Your Enthusiasm. Working closely with Jason Robert Brown and legendary directors Harold Prince and Susan Stroman, James was the associate/resident choreographer for the world premiere of Prince of Broadway in Tokyo and the hit Broadway production at the Manhattan Theatre Club, New York. James set the original choreography for TOHO Theatre Group’s brand new musical production of Bullets Over Broadway in Tokyo James was the associate choreographer on the original Broadway production of A Christmas Story, the Musical; working with Oscar, Tony and Grammy winning composer/lyricist team Pasek and Paul and the New York Philharmonic Orchestra’s Carousel starring Kelli O’Hara, Nathan Gunn and NYC Principle Ballet dancers Tiler Peck and Robert Fairchild

As a performer James was seen in the Broadway and London stage productions and Film version of the Mel Brooks musical The Producers with Nathan Lane and Matthew Broderick. James was honored to play Carmen Ghia in the Royal Variety Performance of The Producers in the presence of HRH Prince Charles for UK Independent Television. The Original Broadway production of Mel Brooks Young Frankenstein the Musical (Igor), the U.S. First National Tour of 42nd Street and White Christmas at the Pantages theatre, Hollywood. Jubilee! Las Vegas and dancing with the famous Bluebell Girls in Bravissimo and C’est Magique at the Lido De Paris and The Sporting Club in Monte Carlo James made his London West End debut in the Stephen Fry and Mike Ockrent award winning musical Me and My Girl at the Adelphi Theatre. He also appeared in the original London cast productions of Disney’s Beauty and the Beast, at the Dominion Theatre and Jerry Herman’s Mack and Mabel at the Piccadilly Theatre. A particular thrill was partnering Chita Rivera and Rita Moreno in The Styne Way Gala honoring Jule Styne and dancing with Broadway’s legendary Carol Channing in the Hello Dolly Gala both at The London Palladium.

James is the founder of Audition Truth, a workshop that prepares musical theater performers for the high-pressure world of Broadway auditions. He has taught in the UK , Japan and across America.

JACKIE BURNS is Broadway’s longest running Elphaba in Wicked and is the face of the brand. She replaced Idina Menzel in the National Tour of If/Then and was also a part of the original Broadway company. Her other credits include the Tony Award-winning revival of Hair (OBC) and Rock of Ages (original off-Broadway company). Selected regional theatre credits include: PCLO, Paper Mill Playhouse, Goodspeed, Casa Mañana, George Street, Alley theater. Film/TV: "Set it Up,” "The Magnificent Meyersons,” “Ghost,” “Great wall of Warren.” Jackie has sung all over the world with Grammy and Tony Award-winning composer, Frank Wildhorn. Most recently she has created roles in the new musicals, A Walk on the Moon and Cowboy Bob.

How to request to participate

Masterclass Participation Request forms are due by March 11. Selected students will be notified no later than March 18 if they have been selected to perform. Preference will be given to students performing Carner & Gregor songs.

You will be asked to provide the following in the Masterclass Participation Request form:

Parking will be available in Lot H and Lot G.

Please plan to dress comfortably as you will be active and moving throughout the day. You are welcome to bring an audition cut or two for the breakout session with Carner & Gregor, though this is not required.

Participation is limited. Contact Dr. Rachel Ware Carlton at CarltonRJ@lakeland.edu if you have any questions or would like more information.