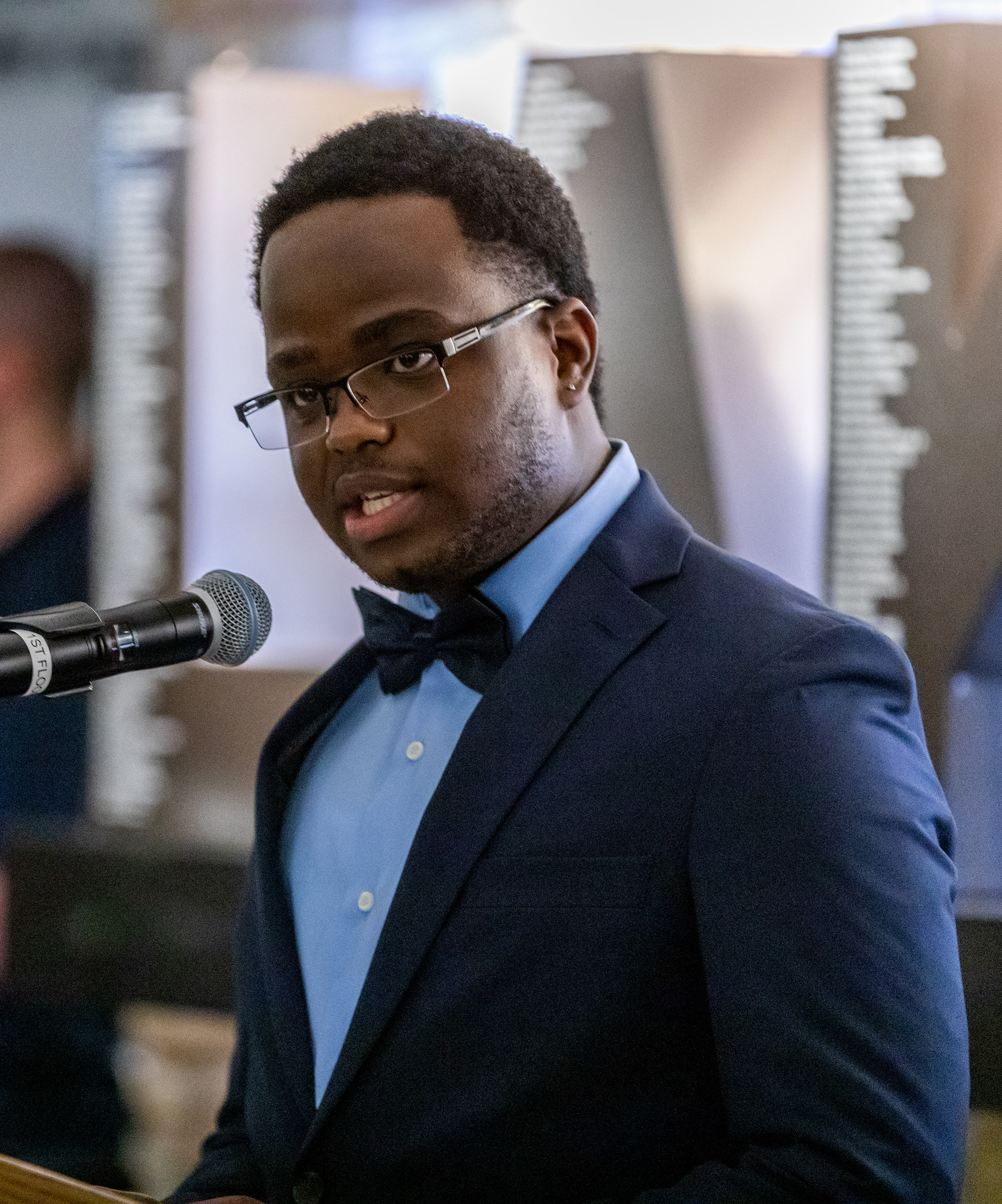 When Lakeland senior Jean Louis completed the final courses to earn a bachelor’s degree this December, he put the finishing touches on a remarkable, life-changing journey.

Not bad for a student who enrolled at the wrong Lakeland. More on that later.

Louis came to the United States when he was 15 from Haiti with a dream of becoming the first in his family to graduate from college. He knew little English and had a rocky relationship with his guardian family that led to him becoming homeless.

“I was often told that I wasn’t good enough,” Louis said. “’College is not for you.’ ‘You won’t pass the ACT.’ ’College is expensive, how would you be able to afford that?’ I’ve heard it all, and some of those critics were people who should have encouraged me. However, I did not listen, nor did I let them enter fear unto me, and that came with consequences.”

Louis was living in a 6-foot square storage unit in Orlando, Florida, during high school. It was so small that he couldn’t fit a bed, so he slept on the floor. He received letters from “Lakeland University,” assuming it was in Lakeland, Florida, so he applied and was accepted. But as the date to visit and tour the campus arrived, he realized the school was more than 1,200 miles away. He took a chance and rescheduled the tour.

“Although I had no idea how I would be able to do this on my own, I had faith,” Louis said.

He flew to Wisconsin, filled with a variety of fears he knew he needed to overcome. “The fear of the unknown, the fear of falling short, the fear of failure, the fear of being frozen to death,” Louis said. “The night I arrived here was the first time I slept on a bed in three years.”

Louis was paired with then-admissions counselor and Lakeland graduate Jake Heinemeyer who Louis said did a great job convincing him that studying at Lakeland would work. Three years later, he stood in front of his peers delivering one of the graduate messages as part of the December graduate celebration.

“Despite all the challenges, I’ve always believed that it was my duty to break generation courses and create a better life not only for myself but also for the next generation,” Louis said at the celebration. “Tonight, I have the honor to be a first-generation college graduate.”

Moving to Lakeland was starting over for Louis, but he quickly found people who connected him with the resources he needed for success and security. He noted LaJill Edge in student activities, Laura Orth in financial aid, shuttle drive CJ Johnson and Jess Lambrecht and Mara Poulette in the Cooperative Education & Career Readiness team as people who positively impacted his LU experience.

“The experience here at Lakeland was life-changing for me,” Louis said. “I’ve always felt the love and the support of everyone here. As a result, I became more confident; built leadership skills, created networks and gained more experience.”

On the way to completing his degree in business administration with an emphasis in healthcare management, Louis took advantage of Lakeland’s Co-Op program, volunteered in the community and got involved on campus, including serving as vice president of LU’s chapter of the National Society of Leadership and Success, which he calls one of his greatest accomplishments.

Louis also notes the positive impact of Ann White, who attends his church and has become like a grandparent to him. “She has always been there for me supporting me, encouraging me and cheering for every move I make.”

That additional support, Louis said, was critical to his reaching the finish line. “Sometimes, just a ‘I am proud of you!’ helps by reassuring you that you’re doing something great or you’re on the right path,” Louis said. “Most of the time, we do so much, and we can be so hard on ourselves. We forgot to give ourselves self-recognition for the great things that we accomplish. So, it’s always good to have someone to remind you that you’re doing something that is worth the hard work.”

Armed with a bachelor’s degree, Louis’ Lakeland journey is just beginning. He plans to earn a master of business administration at Lakeland and take advantage of Lakeland’s relationship with Bemis Manufacturing Co. to gain additional work experience.

“Lakeland is like home to me,” Louis said. “It was not easy. If I have learned anything in my time here, it is the power of believing in yourself and associating yourself with the right people.”