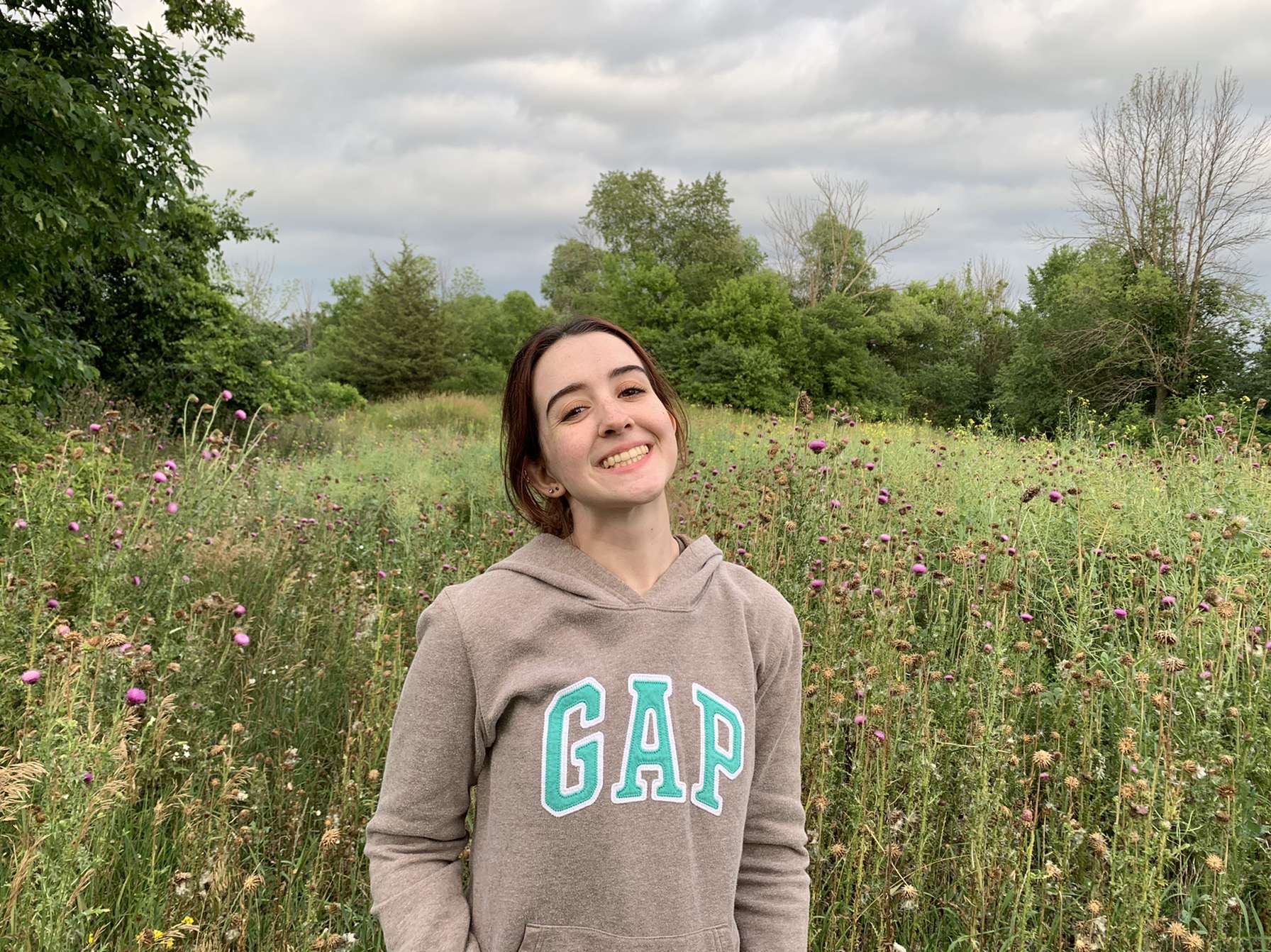 Lakeland junior Marian Cramer grew up in Dousman in southeastern Wisconsin where the town mascot is a bullfrog and they hold a frog jumping contest. Her first job was working at the town’s frog-themed gas station.

“Although it's every girl's dream to work at a frog-themed gas station, I'm hoping to work as an editor while writing my own novels on the side after graduating,” Cramer said.

This frog turned fish is currently taking full advantage of a unique Lakeland major and some work experiences that have solidified her career goals.

She’s double majoring in English with a professional writing emphasis and in the state’s only bachelor of fine arts in creative writing program.

Outside the classroom, Cramer serves as an intern helping plan the Great Lakes Writers Festival, which is set for November 3-4. She’s also an assistant editor for Lakeland’s literary magazine, “Seems,” and she’s worked for the Bradley Theatre staff since her arrival as a freshman.

The combination of classroom and experiential learning – a hallmark of Lakeland’s Cooperative Education program – has Cramer well on her way to her dream of becoming a published author.

She grew up in a household surrounded by art forms. Her father, Bret, was an English major in college who often sang in their church, and both her parents performed in high school theatre, which led to their four children also doing theatre. Bret read bedtime stories to his children, often novels, and Marian remembers her father doing voices for all the animals in “The Wind in the Willows.”

Marian started playing the flute when she was 11 (she was in the LU Band for a time) and was writing novels at 7, including a somewhat dark story about talking vegetables who hid behind appliances in the kitchen so they wouldn’t get eaten. “Sentient vegetables,” she said, smiling.

She graduated from Kettle Moraine School for Arts and Performance, a public charter school that’s part of the Kettle Moraine School District. She came across Lakeland and its creative writing program by chance thanks to an email based on her academic interests. During a Lakeland campus tour, a lunch conversation with Associate Professor of Writing Jodie Mortag – and winning Lakeland’s full tuition Humanities & Fine Arts Scholarship – sealed the deal.

“I really want that relationship with my professors,” Cramer said. “I want them to know who I am.”

“She is a true artist,” Mortag said of Cramer. “She is the real deal. She proves that art is not dead for this generation. She will go to graduate school for an MFA. She will have a book out someday. She is one of the most talented, mature, intelligent and intuitive students I have seen come through the program.”

The skills Cramer is learning through her Lakeland experience are the initial chapters of a bright future.

Cramer is one of three interns helping Mortag plan the Great Lakes Writers Festival, Lakeland’s annual celebration that brings a pair of authors to campus for readings and workshops. Cramer frequently communicates with Lakeland’s marketing team and peers managing social media accounts to help promote the event, in addition to helping Mortag with logistics for the two-day event.

A member of Lakeland’s Honors Program, her potential final project is creating an event for high school students in the region to visit LU, participate in a writing workshop and learn more about the creative writing program.

“What would an event like that look like? This experience has been really helpful to see all the steps that go into it,” Cramer said. “It feels a lot less daunting.”

She’s in her second year assisting with the publication of “Seems,” and the work ranges from selecting submissions for publication to copy editing to the layout and printing process. It’s also helping her prepare for her own successful writing career.

“I’ve sent out my work to see if I can get it published, so it’s nice to be on the other end,” said Cramer, who also keeps a personal journal. “I want to start sending out more now that I have that experience.”

The next stop after Lakeland will be graduate school, and Cramer expects to focus on a newfound passion – poetry writing – thanks to a freshman-year class with former Lakeland Professor and award-winning poet Karl Elder.

“I hadn’t learned to write poetry before or what was supposed to be in a poem,” said Cramer, a prolific reader whose recent favorites include Sue Monk Kidd’s “The Secret Life of Bees” and Delia Owens’ “Where the Crawdads Sing.”

“I submitted my first poem about going to a drive-in with some boy and (Elder) emailed me and said you should know you’re one of the best I’ve seen.”

She received additional validation during a 1-on-1 meeting last spring with visiting writer Dawn Hogue ’90 M.Ed. ’00. “I walked in and she said, ‘I thought you’d be a lot older. Your poems just feel so mature,’” Cramer recalled. “I just kind of found my groove.”

She also has Mortag, a kindred spirit who is always encouraging Cramer to read her work in public at literary events and open mic nights, which she enjoys.

“She’s probably one of the best writing teachers I’ve ever had,” Cramer said. “She has this way of connecting with everyone. She almost tailors her advice to the student and what each student needs. She has such a positive vibe. You can tell she has a lot of passion for what she’s doing.”

After graduation, Cramer plans to work as an editor while building her writing career. She hasn’t ruled out teaching thanks to her inspiring mentors at Lakeland who have helped her re-focus how she approaches her work.

“I tend to gravitate toward wanting criticism so I can work on things and what’s wrong so I can fix them,” Cramer said. “But there is also something to be said for looking at what I am doing well. That’s forced me to take step back and look at that in my work, as well as other people’s work.”