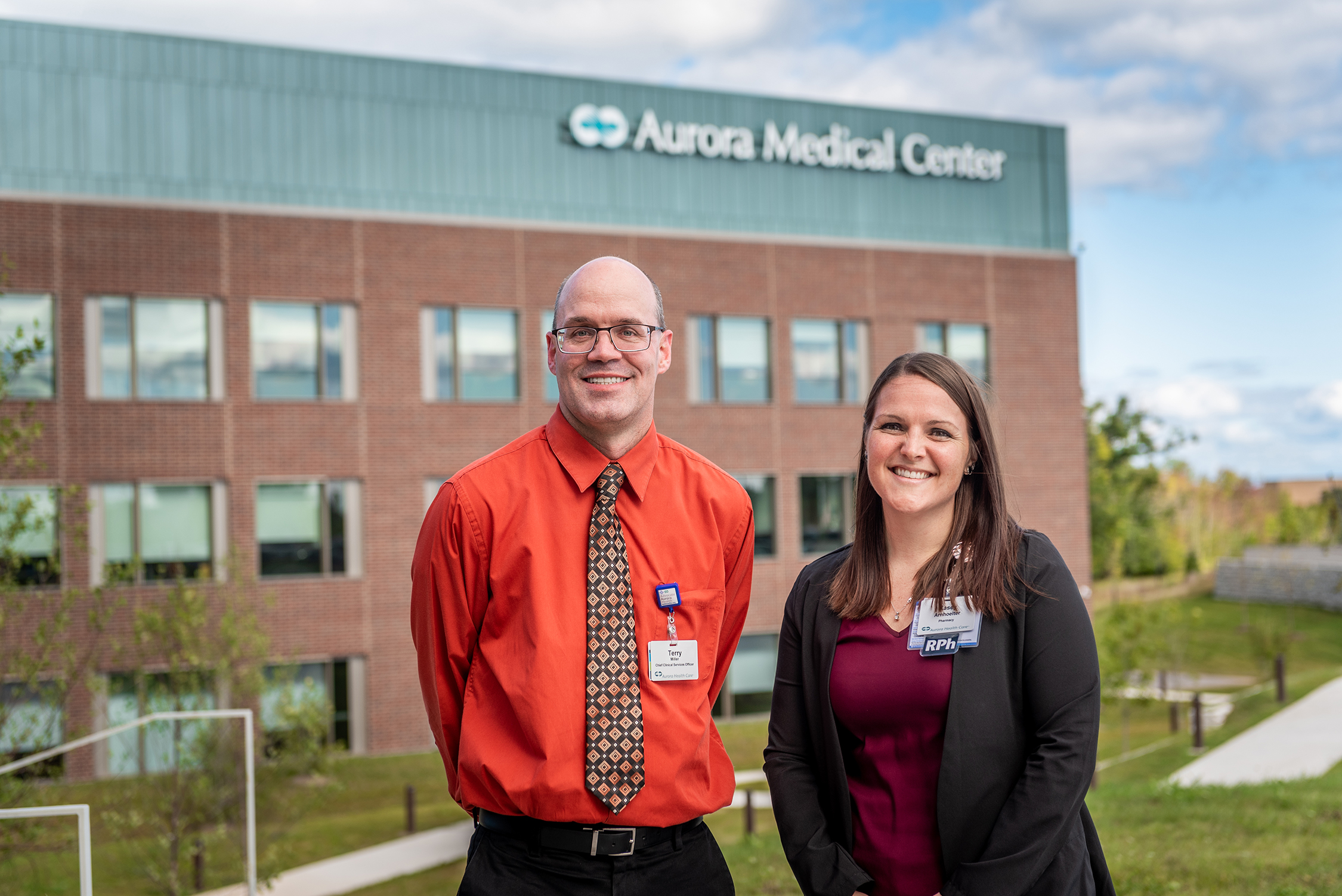 A Lakeland reunion 13 years in the making helped Terry Miller ’09 and Kasey (Gussert) Arnhoelter ’09 personally experience the depth and connections of the Lakeland family.

When Miller, the chief clinical services officer for Aurora Health Care, met with Arnhoelter for her orientation earlier this year for the director of pharmacy role with Aurora Medical Center Sheboygan County, he knew from her resume that she was a fellow Lakeland graduate.

As she sat through the orientation, Arnhoelter kept noticing a nameplate on Miller’s desk that looked oddly familiar.

“It’s one thing to have a nameplate,” Arnhoelter said. “But when it looks exactly like yours …”

Miller handed her his award and flipped it over to show his name and the year on the back. And suddenly, this job interview became a very unexpected reunion of Lakeland award winners.

“I was standing right next to her that night,” Miller said. “During our meeting, I paused when I realized we were the same people on that stage that night. We’re two people who never knew each other and didn’t attended classes together, but 13 years later are sitting in the same room together.

“I can’t believe that out of all those students that we ended up in the same community and it led us into these roles and the future of caring for this community.”

As Aurora settles into its new facility on Union Avenue in Sheboygan, these two reunited Lakeland graduates, after playing key roles in moving the hospital this past summer, are focused on providing services to patients and the community moving forward.

Miller, an Illinois native who has lived in Sheboygan County for nearly 30 years, is a key administrator, overseeing operations for 23 departments and two cancer centers. His teams support patient care and deliver operation of the building. He was local project liaison for the new building project, and for 12-plus years with Aurora he has managed projects throughout the organization with the goal of reducing the cost of healthcare.

Arnhoelter, a Kingsford, Mich., native, oversees a team of 29 people that makes up the pharmacy at the new Aurora facility, as well as the pharmacies at Aurora Medical Center Manitowoc County in Two Rivers and the Aurora Health Center on Union Avenue in Sheboygan.

“I never thought I’d be in a leadership role like this at my age,” Arnhoelter said. “Moving a hospital … those were some of the hardest months of my life. There is so much pride in doing it and I learned so much along the way. I appreciate so much better what goes on behind the scenes and knowing the inner workings.”

While Miller and Arnhoelter are over a decade removed from their Lakeland experience, they both point to their education and relationships they formed that have shaped their approaches as professionals.

Arnhoelter often does rounds at the hospital, answering patient’s questions and explaining the medications they’ve been prescribed. Miller said it closely resembled the personal attention that faculty provided in Lakeland classrooms.

“That caring side of Lakeland prepares you well for a career in healthcare,” said Miller, who has a Lakeland bachelor’s degree in business administration and marketing. “One of the things I love about Kasey is she is humble, she listens and collaborates. If she doesn’t know the answer, she goes to a content expert in her pharmacy.”

Arnhoelter, in turn, underscored the support she feels from senior leaders like Miller, one of her direct supervisors. “How welcomed I have felt here takes me back to how welcomed I felt at Lakeland,” said Arnhoelter, who has a biochemistry degree from Lakeland.

Miller quickly added, “You get to coach people again. You get to teach and coach. You said in your interview that’s one of the things you were looking forward to.”

The two have remained connected to their alma mater. Miller’s daughter, Hannah, is a junior at Lakeland and in her third season with the women’s volleyball team, so the Millers are regulars at LU volleyball matches.

Arnhoelter, her husband, Eric, and their two children have settled in Eric’s hometown of Howards Grove where they’re building a house. It didn’t take long after moving back before Lakeland Professor of Biology Greg Smith and Professor of Exercise Science and Sports Studies April Arvan – both primary influences during her time at Lakeland – reached out to welcome her.

“Having those Lakeland connections and understanding the impact of those allowed me to get more acclimated here and learn what I needed to do to plan this culture and move the hospital,” said Arnhoelter, a graduate of the UW-Madison School of Pharmacy who worked in pharmacy roles in Green Bay at Aurora BayCare Medical Center and Milo C. Huempfner Green Bay VA Health Care Center for over six years before her current job.

She recalled needing a course that was a prerequisite to pharmacy school that wasn’t scheduled to be offered. She spoke to Smith, and he taught the course for her as an independent study course. “He was helping me out so I could get into graduate school,” Arnhoelter said. “At a big university, that would never happen.”

The night he won the Lope Award, Miller, who was working for the Blood Center of Wisconsin at the time, was asked about his future plans with his degree. He wasn’t sure where it would take him, but he knew he wanted to stay in the area and give back.

“That little college in the middle of the cornfields was my field of dreams,” Miller said. “The relationships get you ready for your professional life. You don’t forget the people you met there and values you were taught. And those values correlate to what a lot of organizations are looking for.”