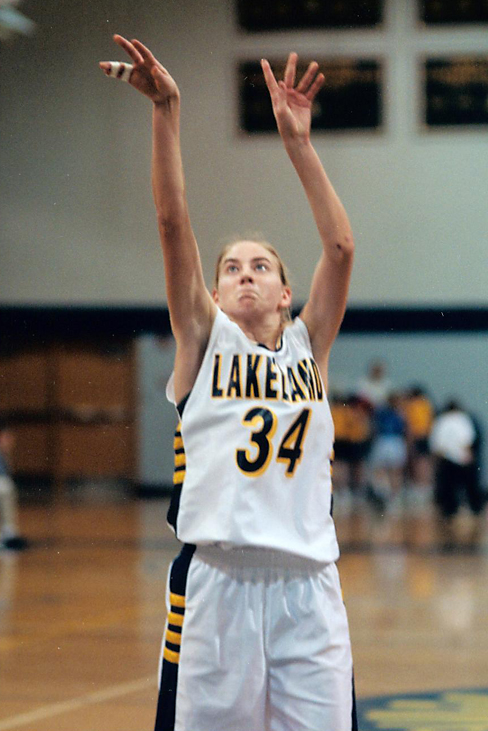 Lakeland University will recognize the record-setting basketball career of 2002 graduate Jill (Dewane) Banowetz by retiring her number 34 at a halftime ceremony on Saturday, February 11.

Banowetz’s No. 34 becomes just the third number in Lakeland history to be retired, joining No. 33 of football great Pat Curran and No. 54 of men’s basketball great Waymon Stewart.

Lakeland women’s basketball will host Benedictine on February 11 at 4:15 p.m. Banowetz’s jersey number will be retired at halftime as part of Lakeland’s Think Pink game, which is dedicated to breast cancer awareness efforts.

Banowetz was among the most dominating athletes in Lakeland’s history. The Denmark, Wis., native was a four-time First Team All-Lake Michigan Conference selection and was named conference Player of the Year three times.

She was named First Team NCAA Division III All-American her senior year, when she led the Muskies to a 26-3 record and their first NCAA Division III tournament win. She was inducted in the Lakeland Athletics Hall of Fame in 2012 and the school's career scoring leader with 2,154 points, the only player in program history to top 2,000 points.

She also is Lakeland's career record holder in steals (252) and ranks in the top 10 in career rebounds and three-pointers made.

She graduated with a bachelor’s degree in exercise science with a minor in business administration. Jill and her husband, Derek, and their twin children Riggs and Renna live in Denmark. She works as a branch administrator for Graybar Electric.