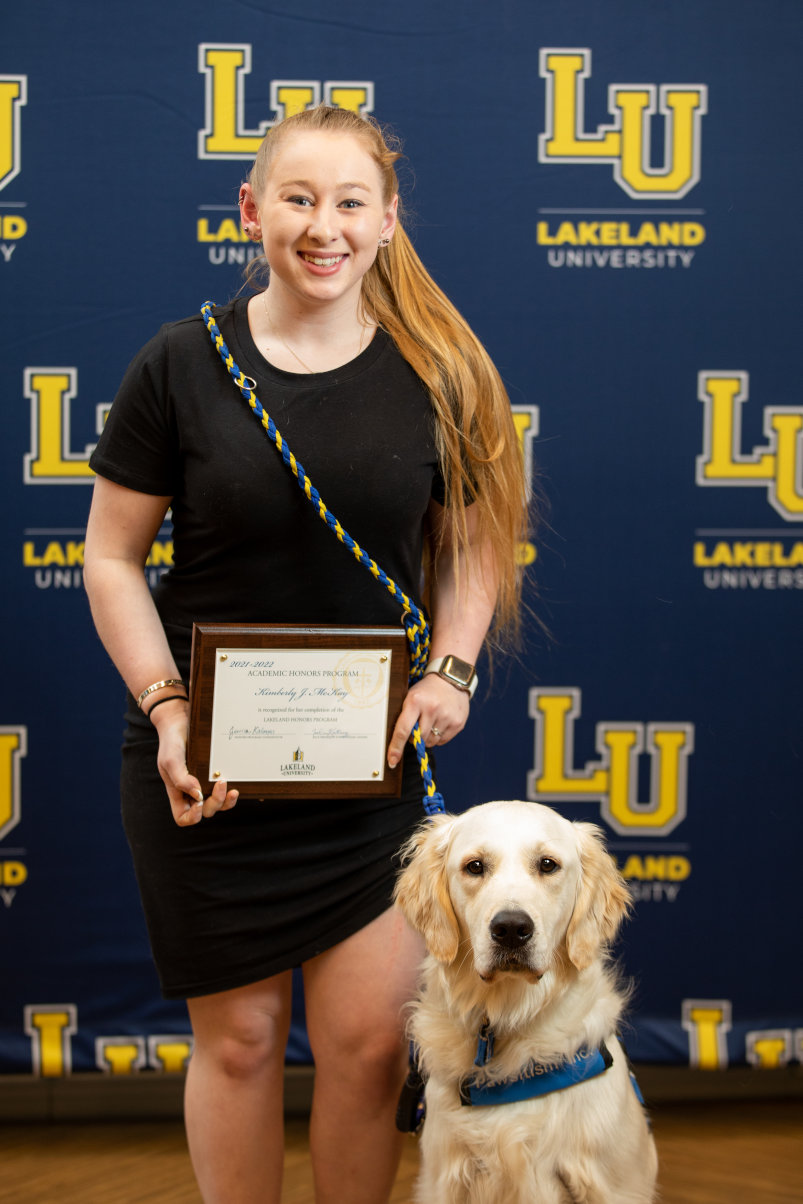 McKay led the creation of Muskies Puppy Club, an official Lakeland student organization that works with Pawsitism Inc., a Sheboygan, Wis.-based nonprofit that trains service dogs for children with autism.

Her work to create the club, as well as a host of other accomplishment and activities, led to McKay being named the winner of the 57th annual Clarence H. Koehler Award, the university’s top award for undergraduate students.

The Koehler Award is presented each year to a Lakeland senior who best exemplifies “The Lakeland Spirit” through participation in and support of the university’s programs and activities. To be eligible, graduates must complete all their undergraduate years at Lakeland and maintain a high level of academic achievement.

Pawsitism and Lakeland had a strong partnership thanks in large part to 2020 Koehler award winner and Lakeland graduate Shyanne Koski, who helped recruit student volunteer trainers and paved the way for dogs to visit the Lakeland campus as part of their training.

McKay, a Bolingbrook, Ill., native who graduated in December with a bachelor’s degree in criminal justice, wanted to see the partnership grow so dogs in training could live every other week on campus with their Lakeland student trainer. She earned certification to be a trainer and worked closely with Lakeland officials – during the pandemic – to make Muskies Puppy Club a reality. She served as the club’s first president.

McKay and her dog, Harry, became fixtures on campus, as Harry accompanied her to class, around campus and to Lakeland volleyball matches as McKay was a member of the team.

“People will say ‘Hi’ to Harry before saying anything to me,” she said with a smile.

Her passion for the program also morphed into her project for Lakeland’s Honors Program, an academic track that begins freshman year and requires an extensive independent research project created by the student in consultation with their faculty advisors.

In addition to founding the new student organization as part of her project, McKay developed and implemented a recruiting and training event on campus.

Involvement with Pawsitism was also instrumental in her own development. McKay recalls being a “sad person” her freshman year, going from class to the gym for volleyball and to her room. Through the help of her teammates and friends, as well as her growing involvement on campus, she grew into a strong young leader.

In the spring semester of her sophomore year, McKay grew even more when she studied abroad in London. She was a four-year member of the women’s volleyball team, serving as team captain as a senior and being award the Most Inspiring Teammate and Best Teammate awards by her peers.

She is a member of the National Society of Leadership and Success, frequently made the Dean’s List and was a NACC Scholar-Athlete Award winner numerous times. She worked a Cooperative Education job with Lakeland’s sports information department. She was a four-year member Lakeland’s Criminal Justice Club, serving as president in 2021, and was a member of Lakeland’s Powerlifting team and Pen Pals club.

Karin Miofsky, a Lakeland associate professor of criminal justice, said McKay was motivated by making a positive impact on those around her.

“While LU was protecting student’s health through social distancing and remote education during COVID, Kimmy was finding ways to help our community thrive,” Miofsky said. “She rose to the occasion with remarkable creativity and perseverance, finding a meaningful way to stay engaged with each other.

“What sets Kimmy apart is her kindness and caring for others. She inspires the people around her through her volunteer activities, and she embodies a sense of community spirit while holding to her academic and professional commitments. It should come as little surprise that her chosen profession is one of service.”

McKay is currently back in the Chicago suburbs applying for police officer jobs. No surprise – her goal is to be a K9 officer.

“I want to represent Lakeland not just on my jersey anymore but in what I do,” McKay said. “Lakeland made me what I am.”