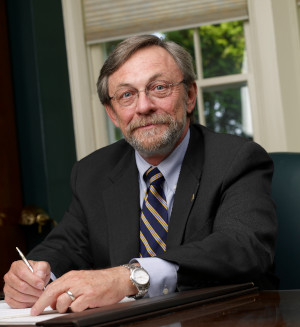 South Hall will be renamed Stephen A. Gould Hall in recognition of the many contributions of Lakeland's 14th president, Stephen Gould. The name change will begin during a Homecoming celebration on Oct. 12, 2019.

The name change was unanimously approved by Lakeland's Board of Trustees at a recent meeting.

Gould joined Lakeland's faculty in 1970 as an instructor of German. He retired in May of 2012 after serving the college for 42 years, including 14 as president.

He was named president in 1998, and Lakeland enjoyed enormous growth during his administration, including records in enrollment, fundraising and growth of the endowment fund.

South Hall was opened in 2008, part of $20 million in campus construction and upgrades that occurred during the Gould presidency. Other highlights of his tenure include construction of the Laun Center for Business and Technology and three residence halls, significant renovations to the Chase Science Center and the Nash Visitors Center and a dramatic expansion of the Todd Wehr Athletic Center.

Gould was instrumental in shaping the early days of Lakeland's evening program, which today is the university's largest program. In 2004, Gould's vision led to the development of BlendEd, the popular flexible delivery model that has kept Lakeland as a leader in evening and online education.

He lived for four years in Japan serving as provost and dean of the institution's Tokyo campus.