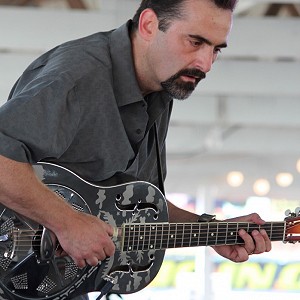 Michael Ammons has been the guitar instructor for Lakeland University since 2012. He earned his undergraduate degree (Natural Science, Secondary Education) from Northland College, Ashland WI, 1992. At Northland he also studied solo guitar, and solidified his interest in traditional American music.

Ammons has performed blues and roots guitar throughout Wisconsin since 1988, from street corners to festival stages. After a move to Sheboygan in 2000, he built an acoustic blues band, The Water Street Hot Shots. Ammons and his band have opened for various blues guitar heroes, and in addition, they received top honors at the 2009 Paramount Blues Challenge, Grafton WI. Ammons has also performed at the International Blues Challenge, Memphis, TN, Feb. 2010, 2011, and with a Lakeland student, Leo Liu, in 2015.

Applied guitar lessons are geared for non-music majors at Lakeland University. Ammons enjoys helping students build their skills and find a musical outlet with the guitar, regardless of prior experience.