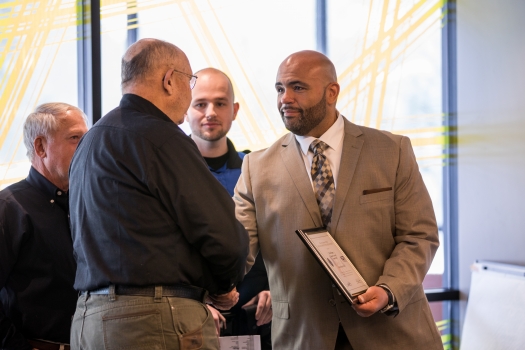 Lakeland University Senior Director of Campus Safety David Simon has been presented the Patriots Award from the Employer Support of the Guard and Reserve (ESGR) of Eastern Wisconsin.

Retired Command Sgt. Majors Edgar Hansen and Clarence Brunner were at Lakeland on Jan. 29 to present the award, along with Sergeant Evan Ossie of the Wisconsin National Guard.

Simon was nominated for the award by Gabriel Wildeman, an officer on Lakeland’s Campus Safety staff. Wildeman is also a member of the Minnesota National Guard, serving with Headquarters & Headquarters Battery (HHB) of the 1-125 Field Artillery Battalion.

“Since this summer, due to my Brigade getting ready for a large, out-of-state training operation, I have been attending many training events,” Wildeman said. “Some of these have been last minute and much longer than just the length of a weekend. David has always been very supportive, accommodating and understanding about this, and I felt he was worthy of some recognition.”

The first in ESGR’s series of awards, the Patriot Award recognizes the efforts made to support citizen warriors through a wide-range of measures including flexible schedules, time off prior to and after deployment, caring for families and granting leaves of absence, if needed.

ESGR is a U.S. Department of Defense program established in 1972 to promote cooperation and understanding between Reserve Component Service members and their civilian employers and to assist in the resolution of conflicts arising from an employee’s military commitment.

Pickhardt continues to give back