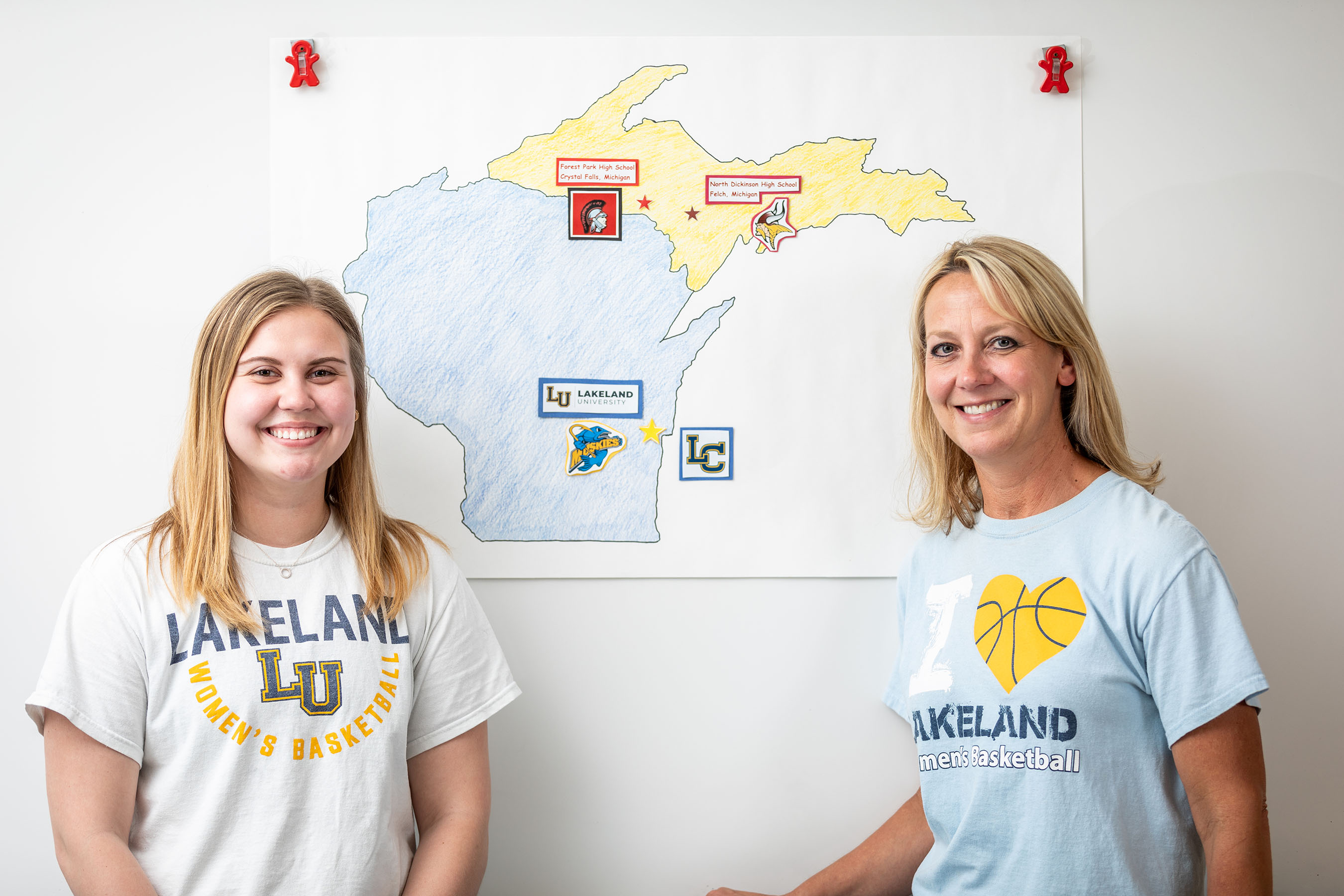 This was a match made in Michigan’s Upper Peninsula.

When 1993 Lakeland graduate and veteran Kohler Elementary School teacher Ann (Harteau) Bitter got an email about hosting a student teacher in the fourth quarter of school year, she asked what school the student was from.

“I can’t say no to Lakeland,” Bitter said.

The story gets better.

After agreeing to take the student teacher – LU senior Abby Nylund – the name seemed familiar. So Bitter did a web search and discovered that Nylund played basketball at Lakeland and was from the UP, just like her.

Bitter grew up in Felch, Mich. (population 734), and graduated in 1988 from North Dickinson High School.

“Everyone at Lakeland knew who she was,” Nylund said. “They were like ‘Oh Ann? She’s great!’ Then I heard she was in the Athletic Hall of Fame.”

These Yoopers turned Muskies quickly got to know one another by comparing notes about back home. “Hey, do you know this person? Do you ever go here?” The answer was often yes.

Shortly after Nylund joined the fifth grade classroom, Bitter started a unit on writing. “I tell a lot of stories, including stories about where I grew up, and use that to teach them how to write stories,” Bitter said. “It was nice to have another person in the room who had context for my stories.”

Nylund added, “She’s telling the students these stories and I could picture it all. She was telling some inside jokes and I got them all.”

For Bitter, having Nylund in her classroom was a way of giving back, and kept a Lakeland tradition alive. One of Bitter’s mentors was Duane “Butch” DeMez ’79 M.Ed. ’86, a longtime Kohler teacher. She got married shortly after graduating from Lakeland, enjoyed the area and quickly landed a teaching job that also allowed her to coach basketball.

“There was no reason for me to beat the bushes back home,” Bitter said “Kohler is kind of a perfect fit for me. When I interviewed here, I remember telling them I’m a small-town person and a K-12 school is what I want because that’s what I came from in the UP.”

Nylund came to Bitter’s classroom after spending the first part of her student teaching experience in Sheboygan Falls with 4-year-old kindergarten students.

“I didn’t know how nervous she would be about that transition,” Bitter said. “She went from observing for a week to jumping right in with teaching math. It’s nice to be able to be yourself with older students, but you have to get used to that being the norm.

“She’s made a lot of progress. She got to know the students very quickly. Plus, I had a very personable, social, kind group.”

Nylund admitted she was nervous initially because she had never experienced the older ages in elementary school, but she felt comfortable quickly. “I really like it,” Nylund said. “It’s opened my eyes to teaching older kids.”

Instruction was in person, although a few students switched in and out of virtual learning due to COVID situations, which gave Nylund additional valuable learning experiences.

Asked what Bitter did that helped her, Nylund said with a smile, “Literally everything. I just watch Ann, the way she talks to the kids, what she says to them … every little bit is so helpful.”

In Nylund, Bitter found not only a kindred spirit, but a young teacher hungry for feedback.

“When you’re learning classroom management and lesson management, Abby is almost immediately willing to try new strategies or make a change,” Bitter said. “That ability to take guidance and advice and be so flexible will push her through her career.”

In typical small-town fashion, Bitter’s help wasn’t limited to the classroom. Nylund posted on social media that she was seeking elementary level books for her future classroom. Bitter shared her request, which led to a carload of books from the parent of one student and a large donation from the Kohler Library.

Bitter had a few people from Felch contact her asking if she had a teacher named Abby in her classroom because they knew Abby’s mother, Karen Nylund. Of course word spread back home because, after all, it’s a small town.

Lakeland grads, current student give back to their hometown